Wandering around the castle of Monemvasia, in the Prefecture of Laconia, which happens to be the birthplace of famous Greek poet Yiannis Ritsos, feels like a journey to the past, to places and times we have only read and heard about.

Spartan nobles, Romans, Turks, and Venetians are some of the former inhabitants and their presence has remained strong throughout the centuries. Churches, fountains, hammams, and wealthy merchants’ homes are still standing within the cobblestones of the castle as well as small wooden arched doors reminiscent of the land of Hobbits.

Today, the Castle of Monemvasia is one of the most beautiful in the world, with a fairytale atmosphere and romantic vibe.

What you need to know before you arrive

Cars are not allowed in the Castle; you have to park outside and find your hotel on foot. And there are no ATMs here either but you will find some in Gefira, the new part of Monemvasia.

The distance from Athens is about 285 km (about 3.5 hours). The shortest and easiest route from Athens to Monemvasia is the one following the A7 motorway that crosses Corinth and Tripoli. In Tripoli, you take the exit for Sparta (sign “Sparta without tolls”) and as soon as you reach Sparta you take the Sparta ring road and follow the signs to Monemvasia. When you enter the new city of Monemvasia, continue on the main road, cross the bridge that leads to the Castle and you will find yourself at the gate of the mythical Castle.

If you have the time (and enjoy driving), there is another option, much longer (about 5 hours from Athens) but it’s a journey of scenic beauty, and you will even cross a gorge. Immediately after Corinth, you need to follow the picturesque seaside route that passes through Argos, Astros, and Leonidio and continues through the traditional mountain villages of Kosmas and Geraki until you reach Vlachiotis, Molasses and finally Monemvasia.

Where to stay & Getting Around  I would strongly recommend staying in the Castle -even though it’s a little bit more pricey- here is where you will experience the magic. Cars are not allowed in the castle, so you have to explore it all on foot.

All-year-round. Summer is considered the most touristy season but for me, the ideal season to visit is spring. If you want to enjoy the place in peace and quiet, go during winter.

Kellia Guesthouse is a listed building, right on the recently renovated Chrysafitissa Square, and the house where the Greek poet Yiannis Ritsos was born.

Casa Rodanthi right at the entrance of the castle offers sea views and elegant décor.

Matoula, great value since 1950, is renowned for its freshly cooked fish.

Kanoni for fresh fish with nice views from its terraces.

Saiti or Tsaiti, is a fried pie typical of the Laconia region with local goat’s cheese and fresh herbs.

Malvasia Café is an impressive spot away from the crowds- perfect for zen moments. And head to Enetiko Café & Cocktail Bar where you should order the Mediterranean breeze cocktail.

Discover history The Castle Town of Monemvasia was constructed in the Medieval Times. From the 10th century, it started to become an important trade and maritime center. Then in the mid-12th century, the city bravely resisted the Norman and Arab invasions. However, another effort of invasion by William Villehardouin, lead to the defeat of the town in 1249. Ten years after this, Michael Paleologus imprisoned Villehardouin, who recovered his freedom by taking the side of the Byzantine rule, helping them to regain the fortresses of Monemvasia, Mystras, and Mani. Unfortunately, its development attracted pirates. In 1419, the Venetian invasions caused the decline of the Byzantine Empire. The Venetians handed the city over to the Turks in 1540 and later returned in 1690 for a period of 25 years. After a second Ottoman occupation, Monemvasia was the first city to be liberated by the Greeks during the War of Independence in 1821.

Walking through magical Monemvasia, allows you to step back in time

Top activities Apart from total relaxation, a top (real) activity in Monemvasia during autumn and spring is hiking. There are many old footpaths in this region that lead to tiny chapels, small settlements, and hilltops with a breathtaking view of the sea.

Edodimopoleio Honey Shop was created by a group of olive oil producers, famous for their honey wine. They offer free tastings of all their products, so you can try and then shop. They also own the “Monemvasia Cosmetics” company, with aromas of prickly pear, myrtle and cyclamen, and other amazing local goods.

What to see… the Church of Elkomenos Christos, dedicated to “Christ in Pain”. It was built in the 13th century by Byzantine Emperor Andronicus.

The Archaeological Museum of Monemvasia is housed in a Muslim mosque opposite the church of Christ Elkomenos. It was constructed in the 16th century by the Turks, as a mosque, then became a public building, a prison, a coffee shop and today it hosts the archaeological collection.

The church of Panagia Chryssafitissa, built on the edge of the rock in the 17th century.

Malva Gallery, where you will discover paintings by a well-known artist of the region, it’s located next to the main entrance gate of the renowned city of Μonemvasia. 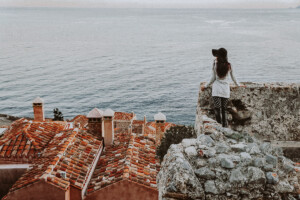 The Church of Agia Sofia perched on the cliff dates to the 11th century with breathtaking views of the Aegean Sea, and when the skies are clear you can see as far as the island of Crete.

The home of Yiannis Ritsos. Outside you can see the statue of the famous poet, located near the entrance of the fortified castle.

Take a day trip to… Monemvasia can serve as the perfect base to explore the beautiful region of Laconia by car. You can visit the small seaside village of Gerakas and the beautiful villages of Kyparissi and Plytra with crystal clear and shallow blue sea. Also, Elafonisos, is a destination on its own.

Can’t leave until… you have a glass (or several) of PDO Monemvasia-Malvasia, a famous sweet wine produced in Monemvasia since the Middle Ages.

All images by Polina Paraskevopoulou © (Copyright)

The Summer When Ikaria Went Quiet

1 0
Polina Paraskevopoulou September 9, 2020
No Comments Yet