Don’t expect any major sightseeing, must-sees, or special activities in Elafonisos. This tiny island that’s like a little piece of paradise is the destination to spend endless hours on the beach, taste fresh Greek food, and a place where you can truly relax. To sum it up, there is no room for stress on Elafonisos! 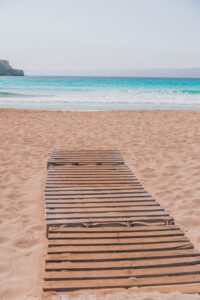 What you need to know before you arrive

-There is only one gas station on the island with prices up to 20% above the rest of Greece.

-There is no bank branch on the island, only two ATMs for withdrawing money (in fact, one operates only during the summer months).

You can reach Elafonisos either by car or bus. There is only one access to Elafonisos, from the port of Pounta, near Neapolis in southern Peloponnese. You should follow the route to Tripoli and Sparti, then you reach Monemvasia and finally Molaous region. From Pounta, you can get into the ferry in your car and in 10 minutes you will step foot on Elafonisos.

Where to stay- Either in Chora or on Simos beach. 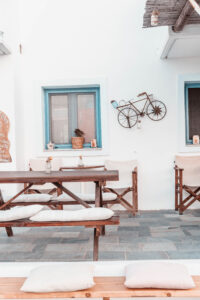 Tips for getting around

Transportation in Chora is by foot. On the contrary, you need a car or motorbike for the beaches, as there is no public transportation on the island. Alternatively, you can take a taxi. There are two taxis in Elafonisos. Mr. Giannis (tel. 0030 6983065066) usually takes the transportations from Athens to Elafonisos and vice versa. For transportation within Elafonisos, you can call 0030 6951484989.

If you are fit you can also rent a bike, since the farthest asphalt point from Chora, is at 6 km.

During summertime. July is the best month, in my opinion, because, there is enough life on the island. Mid-September because the beaches are not so crowded, the weather is good and the prices reasonable. If possible, avoid August because that’s the peak season for all Greek Islands. Even then, Elafonisos feels way less crowded than other islands.

Climate- Elafonisos has a typical Mediterranean climate. The summers are hot and dry, and the temperature is mild in the winter.

–Capari Suites enjoys a privileged location in the greenest part of Elafonisos, offering beach and mountain views. It also has a swimming pool.

-The stone-built Elafonisos Resort is located at a distance of 500m from the beach. It also has a swimming pool.

-Faros family hotel is ideal if you want to stay in Chora. The owner is very friendly and the prices even “friendlier”.

-If you are into camping or just don’t want to leave Simos Beach, you can stay at Simos Camping Elafonisos. Located right on the beach, it provides all the necessary facilities, including restaurants and bars. 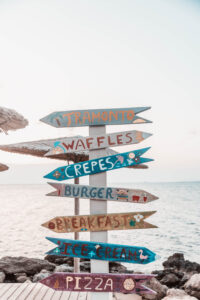 Antonis Tavera, next to the picturesque fishing boats, you can taste delicious dishes with fresh fish and exquisite seafood, based on traditional recipes with local virgin olive oil, cooked with care from the mother of the owner.

Quarter, an Italian restaurant on the coastal road with pizza made in a wood-burning stove with fine handmade dough and fresh handmade pasta.

The Butcher’s Grill for delicious souvlaki, a variety of meats, and ribeye.

Ta nisia tis Panagias, is a traditional restaurant with a terrific view and a gorgeous sunset. We recommend the shrimp spaghetti, fish soup, or rooster in red sauce. 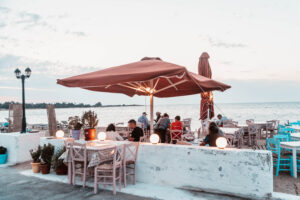 What to eat- The fresh fish is abundant on the island and especially lobster, which is a local specialty and is cooked in various ways at the tavernas of the island.

Stin Akri, an all-day café-restaurant with delicious breakfast and brunch options during the day and tasty cocktails at night. It is located opposite the church-a landmark of Elafonisos.

-Simos is the most famous beach in Elafonisos. And not by chance. Located on the southern side of the island, Simos with its exotic waters and the vast golden sand seems like paradise on earth. Part of this beach is naturist.

-The bay of Lefki is found on the way to Simos, on the southern side of the island.

-Sarakiniko is a large bay with soft sand and crystal water. It is located next to the popular Simos beach.

-Kalogeras is a nice beach near Kontogoni Cape. It has crystal water and part of a submerged ancient town is found close to this beach.

-Kontogoni, a long beach on the northern side of the island, close to the port. 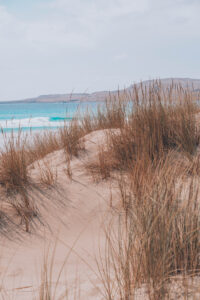 -Ta Nisia tis Panagias, a similar scenery to Simos with sand dunes and turquoise waters. From there you can see the islets ta nisia tis Panagias (Greek for Virgin Mary islands) that gave name to the beach.

-Pavlopetri beach is on the coast of Laconia facing Elafonisos rather than on the island itself. Located a stone’s throw from Pounta Port, it’s super easy to visit either before taking the ferry to Elafonisos or on your way back from the island. Apart from crystal clear waters and endless stretches of golden sand, this beach offers visitors the unique opportunity to swim among the ancient ruins of the oldest submerged city in the world.

-The seabed between Pavlopetri Islet and the homonymous beach is dotted with an ancient settlement’s ruins dating back to 2800 BC. The remains of this ancient city are visible with basic snorkelling gear. 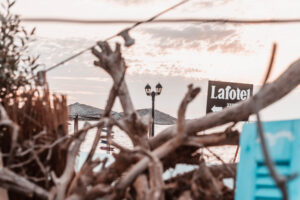 The first historical examples of the culture of Elafonisos are very old, because of the oldest submerged state in the world, Pavlopetri. The important position of Elafonisos was an advantage for pirates and barbarians to attack the ships passing through Elafonisos and Kythira. Moreover, this position was responsible for the occupation of the island and its domination by a number of peoples such as Arabs, Franks, and Saracens.

The island took its recent form after the devastating earthquake of 375 AD, which destroyed Pavlopetri city and divided Elafonisos from the rest of the Peloponnese. The first name of the island, as it is depicted on maps of antiquity, is Onou Gnathos, which means donkey jar, apparently from the shape of the island, and today’s name due, as the name reveals, to the existence of deer on the island.

Must visit villages – Elafonisos is an hour from the castle of Monemvasia and a little over an hour from Gythion.

Elafonisos, despite being a small island, has many local traditions and customs. Some of the most important are: 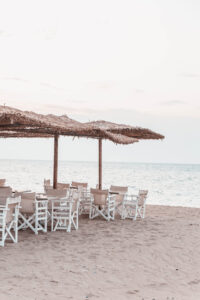 Every summer during a three-day celebration, from the 6th to the 9th of July, Elafonisos honors the anniversary of its liberation (6th of July, 1850) and celebrates the religious anniversary of the inauguration of the Holy Temple of Agios Spyridon. During these days a number of events take place such as the Festival of Traditional Dances with dance groups from Greece and abroad, which started in 2016.

During the last ten days of August, Elafonisos celebrates the feast of fishermen. The event includes local dances from dance groups, live music, and plenty of food and fish in honour of its visitors. Often there are also presentations and projections of the folklore and nautical history of the island.

Insider tips- When there is a strong headwind, go to Lefki beach.

Ideal time to spend here? 3-4 days in order to completely relax by the beach.

Favorite part? The exotic beach of Simos with golden sand and pure water, what else?

What to avoid? In July and August, don’t even think of arriving without booking a room in advance. 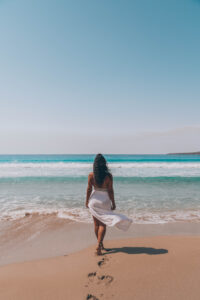 Water sports and kite: Ideal winds and points near the beaches create the perfect conditions for Elafonisos to be named as an ideal place for surf, windsurf and kite.

Hiking: Elafonisos has six hiking and three cycling routes. If there is one you should certainly experience it’s the one that starts from Chora (the port) and ends at the highest point of the island, the village of Vigla. From here you can enjoy the stunning views of Cape Tenaro, Kythira island, and Cavo-Malia.

-“Para thin Alos” where you can find nice men’s and women’s clothes and accessories. 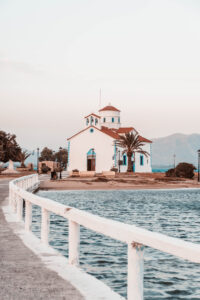 -The main church of the community is Agios Spyridonas, which is built on a tiny separate piece of land which is connected by a bridge over shallow waters to the rest of the island. –

-The church of Panagia Katonissiotissa (Assumption of Mary) built on a hill in the ruins of an old Byzantine temple in 1895. In the interior of the sanctuary, there are old hagiographies. Yοu can find tombs and another finding of Mycenaean civilization around the church.

The Cave of Simos located next to the beach of Simos. According to the legend, the island was born from there. You can reach it through a smooth path from the road. Beware of the bats inside.

Lake Strongyli, located on the beach of Pounta is one of the most important wetlands in the Peloponnese. During Spring you may see flamingos, reeds, mallards, and the rare, endangered species of sea cedar.

Take a day trip to

The stunning castle town of Monemvasia and the countless hidden gems of Southern Lakonia, such as Kastania Cave and Cape Maleas. A trip to Elafonisos can also be combined with Kythira, an off-the-beaten-path island off Southern Peloponnese’s coast. 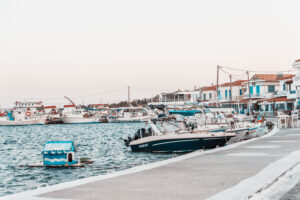 -Elafonissos Town is the main village and center of activities for the island. This is where many accommodations, taverns, and shops are found. The ferry from Neapolis arrives there.

-Moreover, one of the best things to do in Elafonisos is to drive (or cycle or walk) the island’s ring road. The latter connects all villages and beaches, offering breathtaking views at every turn. It takes less than half an hour to drive the full circle.

Alternatively, you can experience the tour of Elafonisos by boat. You will have access to magical waters, otherwise inaccessible. Search for the cave of Carandrea.

You take some underwater photos. Get a camera suited for diving pics because these emerald waters are so clear and beyond imagination.

Special thanks to the Municipality of Elafonisos and the Mayor Mrs. Efstathia Liarou for the realisation of this press trip.

Greece Covered in Layers of Snow

New Underwater Museum in Piraeus Gets the Green Light