Philhellene photographer Mark Wilman, creator of a successful six-year project and book ‘Discovering The Beauty of the Cyclades’ describes his first trip on the island of Sikinos.

Mark’s project has been presented by the British Embassy in Greece, the Greek Embassies in Rome and Tel Aviv and the Aquarium of Milan. His evocative photography and writing transport you to the heart of the Cycladic culture, landscapes and colours. And if you want to experience it for yourself, he is available to offer photographic tours. Here he writes about his first encounter with Sikinos. This personal story about Sikinos island is the second part of a narrative series created by him especially for IN+SIGHTS GREECE.

Discovering the Beauty of Sikinos

Day trips by kaiki to Sikinos were advertised in the port that summer in 1974. My leg was no longer throbbing from the injury so we could go. The journey took about an hour. I remember the donkeys rhythmically advancing up the golden-brown path, its immediate inclination much steeper towards the village, 3km from the start. So bright was the midmorning sunlight, our eyes squinting through sunglasses. My mother’s voice expressed considerable discomfort from her wooden saddle, thankfully with some humour in it. 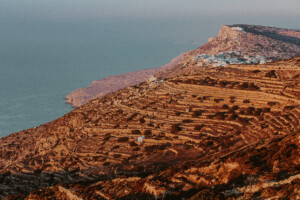 The six-year-old twins in the middle were in a state of quiet disbelief, while the guide, deeply-tanned with black hair, a thick moustache and hat, who led on foot, spoke reassuringly in Greek, my other sister ahead of me at the rear. Compared to Ios, Sikinos was entirely another world; the hills higher, terrains more compact, less people, no cars or noise.

We caused surprise upon arriving to Kastro, my sisters attracting curious smiles from the smartly dressed older ladies. We drank cold, fizzy drinks through double straws from bottles stored in a noisy fridge. A sweet memory unlocked all these years later, and with it a chance to reach out and caress the past. 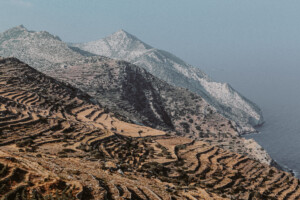 Folegandros and beyond, the mountain top to sea level terracing over much of the land that mesmerised my senses, convincing me it needed exploring. In particular, an isolated building at a high altitude in the far distance held my attention.

When Discovering The Beauty Of The Cyclades project had begun and I could see Sikinos from my kitchen window, did I go? No, not till later. At last my feet got to walk where they’d longed to explore. It was mid-September and I’d misjudged the complexity of the terrain, taking only a litre of water and lots of enthusiasm. The day was scorchingly hot and ended well beyond exhaustion as I descended from a peak open-mouthed but unable to speak any words. Trekking in Sikinos is tougher than anywhere I’ve known in the archipelago, a challenge I’ve learned to love.

The isolated building turned out to be the monumental church of Episkopi dating back to the 2nd century AD. So struck by it, I’ve visited many times, even before sunrise, also with Roxana, the female figure I’ve presented in the work. On one occasion, she’d brought a classical dress, wearing it while posing at the entrance as I photographed via the remote control, the camera mounted on its tripod, placed uncomfortably over carved stones of differing sizes.

Two years later, the grave of a noblewoman from the time of its origin was found hermetically sealed, well-hidden below the lower interior floor. Inside it were gold ornaments and jewellery, plus sulphur and tar which, according to experts, indicate she was possessed. Mystery now surrounds Neiko, one of the most significant archeological discoveries in modern Greek history.

This set of photos became the natural centrepiece of my work and also the exhibition that was presented at the Aquarium of Milan in spring 2019.

It's Vintage But Still Religiously Slurped: Why is Frappe So Adored?