Dior’s highly-anticipated Cruise 2022 presentation in the Greek Capital was nothing short of a high-end fashion extravaganza, as Dior’s creative director Maria Grazia Chiuri created a stylish spectacle that took place overnight at the Panathenaic Stadium in Athens.

The famous stadium, which is home to the modern Olympics served as the stunning 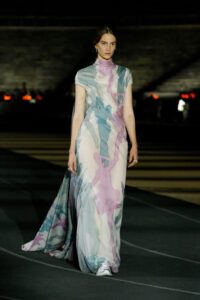 backdrop to showcase a modern collection inspired by Ancient Greece.

Around 500 guests, including many celebrities, artists, and designers, witnessed a runway show that “blended the power of heritage and contemporary inventiveness,” Dior announced to the fashion press.

One of the key inspirations of the collection was the peplos robe worn by ancient Greek women. “The peplos also is an element that allows the body to move freely, that evokes women in movement, and no one more than an athlete moves their body in a really active way,” says Chiuri.

Leading up to last night’s event, Chiuri spent time visiting numerous spots around Greece for research and inspiration; including the expansive Bronze Age ruins of the palace of Knossos and the Heraklion Archeological Museum on Crete. “Here, in a place so often associated with the myth of the Minotaur, 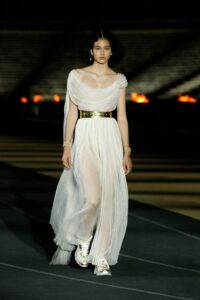 she uncovered the importance of women in religion, venerated as representations of animals and nature,” Dior announced.

She also headed to Santorini to the ruins of Akrotiri and on the third leg of her journey, Chiuri also spent time on the archaeological site of Delphi.

According to Dior, the choice of venue, “creating a prodigious bridge between sport and culture, ancient heritage and contemporary youth, is highly symbolic for Grazia Chiuri, notably through its connections to the body and the freedom of movement she cherishes, but also through the motifs that inform the collection and its sportswear spirit.”

The Panathenaic Stadium was adorned with flags specially created by Italian artist Pietro Ruffo; the illuminated scenography also paid tribute to the architectural lines of the site.

All images Courtesy of Dior