Greece’s romantic island of Santorini is on top of the list on many bucket lists; seeing the breathtaking Caldera, magical sunsets, charming blue-domed churches, and the village of Oia. But one thing that shouldn’t be missed is getting up close to Santorini’s active volcano. 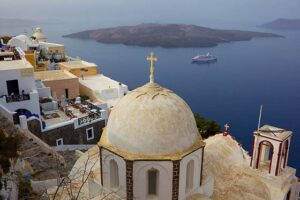 volcano, whose former intense activity gave the island its current shape and morphology. Before the several volcanic eruptions that occurred throughout the years, the size and the shape of Santorini were quite different. It was a much larger, round island, which is why its name used to be Strogili, which means circular.

History of the Volcano

The Minoan eruption that sunk most of Ancient Strogili date back to 1613-1614 BC. The prehistoric settlement of Akrotiri was buried under tons of lava, every island within a 60km range was burned to the ground and a massive tsunami swept everything in its path, even reaching the coast of Crete. 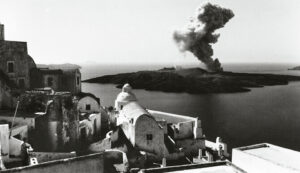 That is when Caldera was formed, a sea basin with a diameter of 10km. Later, over the centuries, the volcano islands of Aspronisi, Therasia, Palea, and New Palea also emerged.

One of the best-known volcanoes in Europe, it is a cluster of five islands in the southern Aegean Sea and lies about 100 kilometres north of Crete. The main islands of Thira and Thirasia trace out the edges of the Caldera, which formed during the major explosive eruptions. This lively volcanic past is spectacularly exposed in the multi-coloured layers of volcanic rocks that form the cliffs that mark the edge of the caldera.

The Five Islands Surrounding the Volcano 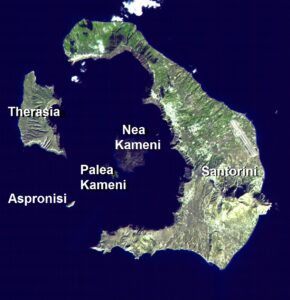 Today the result of these eruptions is the creation of five separate islands, Santorini, Therasia; an uninhabited island called Aspronisi, and the volcanic islands of Palaia Kammeni and Nea Kammeni. They compose a nice sight across the Aegean Sea, facing Santorini, and the great thing is you can visit all of them. The existence of the volcano is visible all over the island of Santorini, especially on beaches that are covered in black sand and pebbles made of solidified lava; the red volcanic rocks at Red beach are one of the most popular spots for international visitors.

The formation of the volcanic caldera that covers a great part of the island is what makes Santorini such an exceptionally beautiful island today, as the settlements that are built on the caldera cliffs offer a wild beauty and a stunning view. You can enjoy your time gazing at this natural beauty and the volcano that lies in the sea opposite the romantic isle. 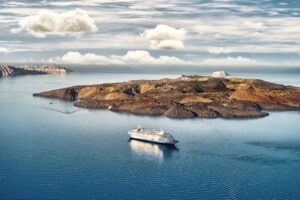 At present, it is an underwater active volcano but you can wander on the two residual islands of black lava. There you can explore the volcano, see its crater, touch the lava rocks and feel the steaming volcano underneath your feet.

On the island of Palaia Kammeni there are hot springs known for their beneficial and therapeutic effects. The waters there contain sulfur and here you can enjoy an alternative mud bath. It is essential to swim in these waters if you wish to take your experience to a whole new level. From here

you can take in the breathtaking caldera from a different point of view.

There are daily boat tours to the volcano where visitors are able to get out and step on it, swim in the springs, and learn more facts about the volcanic activity. The boats depart either from the port of Athinios or from the old port in Fira. There is a variety of tour packages, from short excursions to more complete full-day boat trips that even transfer you to the nearby island of Therasia,  the second-largest island in the archipelago, and at the hot springs on Palea Kameni, where boats moor at Erinia and you can swim to the springs beneath the tiny church of Agios Nikolaos. Boat trips can get crowded in high season, so opt for a small-group guided tour or catamaran tour if you would prefer a more personal experience.

Wear hiking-appropriate clothing and comfortable shoes. Don’t forget to pack a hat, sunscreen, and water bottles. Visiting the volcano requires about 30 minutes of uphill hiking, so may not be suitable for young children or those who are not strong walkers.

Greece Confirms it Will Be Open to Travellers for Summer 2021