From the moment you arrive, Astypalea will take your breath away. The simplicity of this authentic island, which shares aesthetic elements of the Cyclades and the Dodecanese, is what makes this destination extra special!

Its magnificent Chora, the old port, eight picturesque windmills, an imposing Venetian castle built of dark stones; and stunning beaches with crystal clear waters are the main reasons to fall in love with this beautiful island.

What you need to know before you arrive– Astypalea is a butterfly-shaped isle, located in the Dodecanese in the southeastern Aegean but looks a lot like a Cycladic island. Its position contributed to the fact that it was not included in the wave of rapid tourism developments that evolved on other islands in the 80s and 90s. 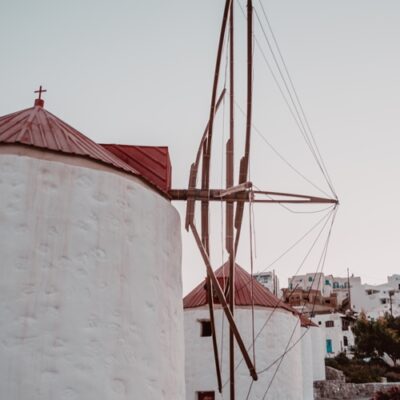 Getting there- You have two options- either by ferry or by plane. The journey by ferry takes around 11 hours from Piraeus, Athens. Blue Star Ferries run every Monday, Wednesday, Thursday, and Saturday from the port of Piraeus and Olympic Air flights run daily except Tuesdays, during summertime.

Where to stay- I would strongly recommend staying near Chora.

Getting around- Around Chora, all roads lead to the Castro.

If you just want to explore Chora, the castle, and its surroundings you won’t need a car. But if you’re planning to do some trekking, explore the villages of Livadi and Analipsi, the charming beach of Agios Konstantinos and other distant beaches you’ll definitely need transport. Astyapalea has a regular bus service which connects all the main points of the island. Bus services run between Livadi – Astypalea – Analipsi – New Port – Airport. 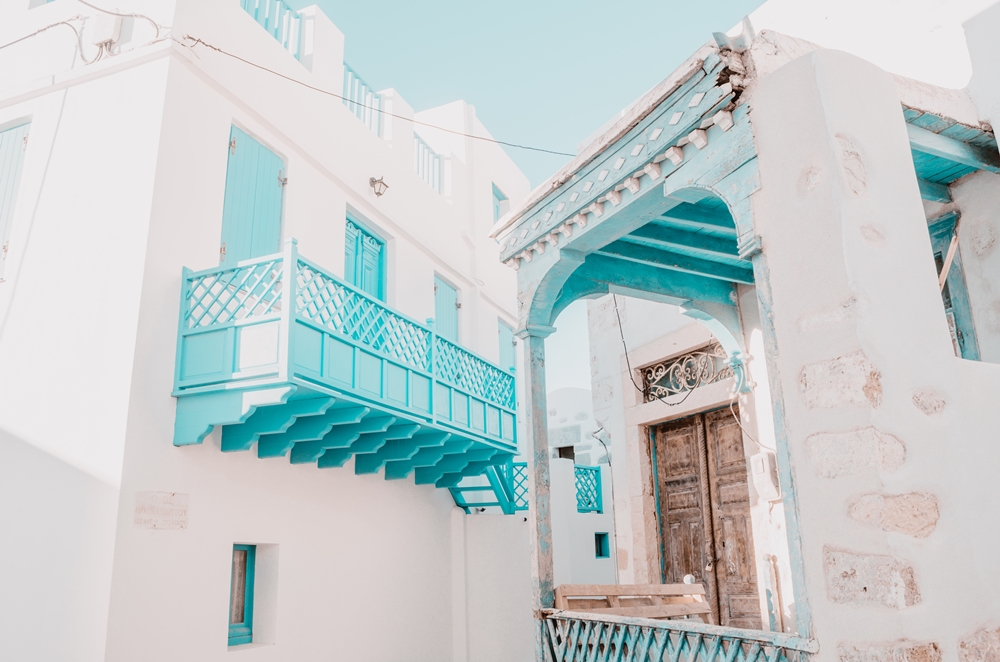 If you are looking for a summer escape the hottest months are August, July, and also June. It’s also perfect in spring, as you can discover the paths through the flower-filled landscape. Some paths pass through traditional creameries producing local cheese.

Kalderimi Hotel on the road from Chora to Livadi. Designed in traditional island style, there are a total of 11 individual houses, all of which have their own distinct appeal.

Pylaia Boutique Hotel, situated over a hillside in Astypalea it has two pools and a spa as an extra bonus.

Agoni Grammi at Chora’s square, just opposite the mills for amazing seafood and homemade Makarounes (pasta).

Aeolos at Pera Gialos for delicious pizza and pasta.

Almyra at Maltezana for fresh fish and lobster pasta.

Paradosiako Kafeneio, a very traditional and authentic place close to the Windmills.

The island’s cheeses are produced by local shepherds from some 15,000-20,000 animals living in the countryside.

Castro, a bar on top of the charming Chora of Astypalea. It has various levels as the walls of the castle.

Mylos Bar, hidden in the narrow road to the castle.

Kouros, the only nightclub playing Greek music, if you want a surreal experience with dancing on tables.

Livadi, the closest beach to Chora. Half of the beach has sunbeds while the other half remains unorganised. 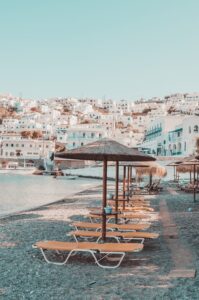 Maltezana. The settlement consists of several smaller beaches, like Mple Limanaki and Plakes.

Another beach close to Maltezana is Steno, one of the best beaches in Astypalea, separated into two organised beaches, the Mikro Steno (small) and the Megalo Steno (big), both with crystal clear waters and two beach bars.

Kaminakia. If you’d like to reach this beach you should calculate approximately 30 minutes of driving. A good part of the road has no asphalt. The beach also has some basic infrastructure and tamarisks that will provide you some shadow. It’s one of the most beautiful beaches of Astypalea, but it can also be crowded during the high season.

Agios Ioannis o Richtis is a hidden gem of Astypalea. You’ll have to walk around 30 minutes to reach this outstanding beach with a stunning landscape.

Discover history- According to Greek mythology, Astypalea and Europe were the daughters of Finikos and Perimidis. The island of Astypalea was first inhabited in the 2nd millennium BC by the Caraes, who came from the ancient region of Caria in Anatolia 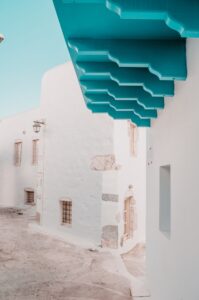 (present-day Turkey). They were followed by the Minoans of Crete. Astypalea seems to have been a wealthy place during Classical times as it is evident from the high annual tribute they used to pay to Athens. There were many temples on the island at that time, another symbol of prosperity. Fruits and flowers practically covered the entire island, which is why the ancient Greeks used to call it the Table of the Gods. During the Hellenistic period (4th-1st century BC), Astypalea was an important naval base of Ptolemy of Egypt. During the Byzantine years, (4th – 13th century BC) the constant attacks from the pirates forced the inhabitants to abandon their houses at the coast and create new settlements inside the island with strong walls as protection. The castle of Saint John was also built at that time, parts of which you can still see.

Cultural events of the island

Do as locals do…

Have a Greek coffee or a meze at the historic Kafeneio tou Moungou in Hora, watching elderly islanders catch up and play “tavli” (backgammon).

Every local housewife has her favorite secret spot (they’ll probably only share it on their deathbeds) for collecting thyme, sage, and saffron that grows on the island. Every November, the local women get together in a mini-ritual to pluck the saffron threads.

Insider tips: Watch the full moon pop up from behind the castle- it’s an absolute must in Astypalea. To enjoy the moment to its fullest, reserve a table at Archipelago Café, and devour one of its nice desserts.

Also, the Cave of Negrou offers a beautiful view of the sea and of Vatses Beach, a 20- minute hike away.

To taste breadsticks made with local ingredients such as thyme, oregano, saffron, honey, and cheese, go to Iliana Bakery.

Ideal time to spend here? You need 5 – 7 days to really enjoy the place. 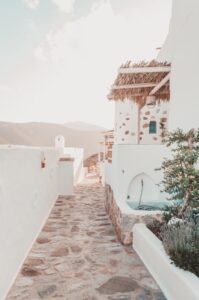 Favourite part? The calm and extremely charming alleyways of Chora and the stunning landscape that includes the windmills, the Castle, and Chora.

What to avoid? Believing that maps and roads here are friends. There are no decent maps of Astypalea, not many street names to refer to and as a consequence, Google was not much help. But this has a good part. You can just get lost on the island and explore it by chance.

Top activities- Hiking. Ftera, located just twenty minutes away from Chora by car, is an ideal climbing location. Also, hiking to the highest spot of Astypalea is a unique experience. The chapel of Prophet Elias offers magnificent views of the capital of Astypalea.

Don’t miss the opportunity to visit “KATOA -The second life of things” in Chora -practically a second-hand shop- where you can find old items that the owner has transformed into something new and each one of them comes with a unique story.

At Tsakalos in Maltezana, you can buy honey, jams, liqueurs, body and face creams made with honeycomb, and other local products from Keranthos in Hora. 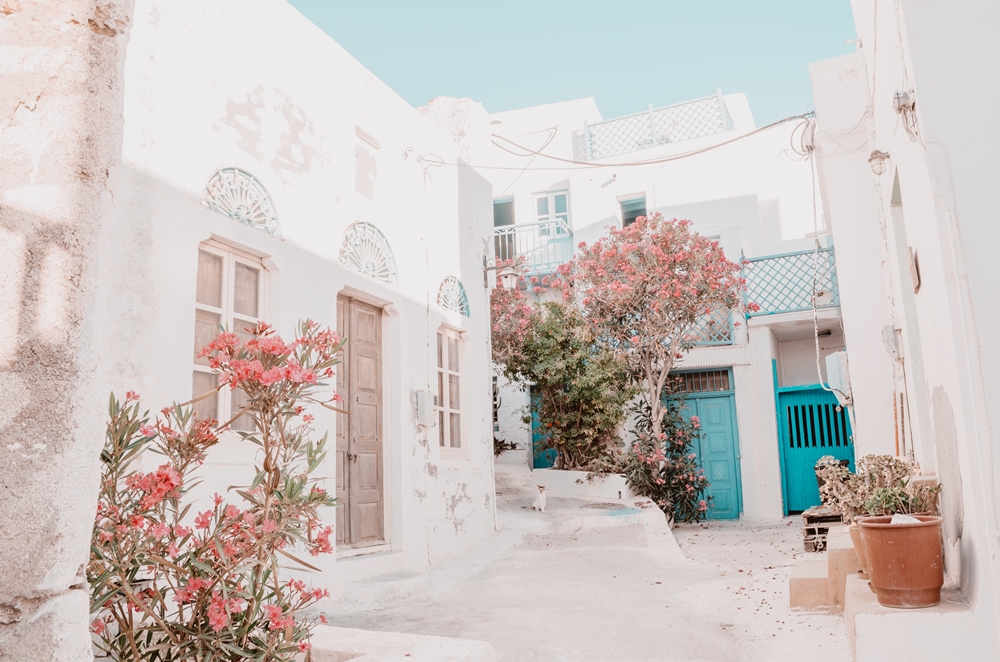 The Venetian Castle that stands on a hill above Chora. Its’ walls survive till today. 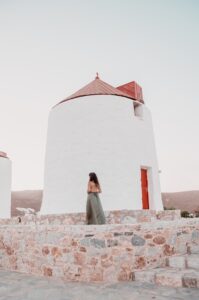 The eight traditional windmills, preserved until today- the most picturesque spot of Chora.

The Monastery of Saint John, nestled between two steep slopes. It offers a magnificent view of the islets Pontikoussa, Ofidousa, and Ktenia.

Drakos Cave (the Cave of the Dragon) with impressive stalactites and stalagmites of different colors.

The Archaeological Museum that hosts exhibits, such as stone tools, ceramic pottery and jewellery from the Prehistoric and Medieval times. You can also find photos from Negros and Drakos caves.

The Church of Panagia Portaitissa, considered among the most beautiful churches in the Dodecanese.

Also, the Church of Panagia Poulariani, accessed only by boat or on foot. It has a natural rock formation in the shape of the Virgin Mary embracing a child.

Take a day trip to…

Τake the little boat to the nearby uninhabited islands of Koutsomitis and Kounoupi (or Kounoupes) with an unbeatable Aegean feel. There are several daily excursions that start from the port of Astypalea around 11 am and return in the late afternoon. They visit both islands and stay approximately two hours at each one. There are currently two options. The first choice includes lunch and drinks and costs 45 € while the other one doesn’t include any food or drink and costs 15 €.  Keep in mind that when winds are too strong the excursions are cancelled.

Can’t leave until- You treat yourself to some hlori (a soft local cheese), anthotyro (dried hlori) and kopanisti (a spicy, creamy cheese). And certainly, buy other local products, like sage, oregano, thyme, and chamomile.

A Crash Course in Greek Cheeses

0
Polina Paraskevopoulou November 17, 2020
No Comments Yet