A New Book About The Greek Crisis By Jorge Sotirios

Jorge Sotirios was born in the shadow of Bradman Oval in the Southern Highlands of NSW and worked at his father’s Mittagong cafe when not obsessively following the St. George Dragons. 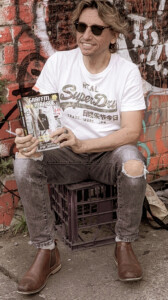 Since then he has travelled the globe as a travel journalist covering the Arts, the Environment, Politics, and Culture and has written for ‘The Sydney Morning Herald’ and ‘The Australian Literary Review’. Part philosopher, part adventurer, and always the clown, Sotirios has travelled to 30 countries working as a foreign correspondent.

‘Lonesome George Cést Moi’! is his first book and recounts his travels in South America during 2004-2005. A captivating story told with comic flair – romance, broken hearts, and self-exploration – told with wry humour while illuminating the beauty and culture of Argentina. Here he writes exclusively for IN+SIGHTS GREECE about how his successful new book, ‘Graffiti Over Marble’ came into being, and the invaluable experience of keeping a journal. 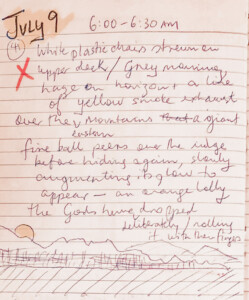 When I dusted off a journal from a stacked pile deep in my study, it reminded me that sometimes failure is the mother of success. Years ago, my intention had been to pen a travel book on Greece. My model was Henry Miller’s intense Colossus, alongside the elegance of William Dalrymple’s From the Holy Mountain. I undertook the journey but the journal, now a bundle of yellowing paper, is all that remains of that encounter. I failed, in other words, to see the book to its end.

The adventure though would prove to be formative. I crisscrossed Greece by car, all the while scribbling notes down. The vehicle of choice, the Russian Lada, common to Greece towards the end of the 20th century, was an efficient and unpretentious car, more iconic of the Soviet-era. Squat in shape, without power-steering, but possessing a steering wheel that burnt like handling hot coals during summer, the Lada would transport me to the drab ports dotted on the Greek map. By journeying up and down the coast connecting with an uncle working aboard a passenger ferry, I stopped at obscure ports like Rafina, Kavala, Monemvasia, Gytheion, and Patras. My aim was to portray a dialogue between the rugged mainland and the divine sea. Greece was then in transition. A travel narrative based on dual perceptions, myself and uncle Panos, would ideally have shown a different country hurtling towards the new millennium. Pre-euro, post-donkey.

The simultaneous construction of new highways changed shipping routes immediately just as the flash BMW, Merc and Audi phased out the dowdy Lada. Travels in a Lada became the working title which I’d pretentiously coined for its play-on-words. It didn’t eventuate because I lost inspiration, what with Greece in an economic boom. I dispatched drafts to the book crypt, the bottom drawer of my desk. Flash forward in time and some of that exchange infused my current book, Graffiti over Marble. Although focusing on the Euro crisis since 2012, elements of the shipping industry, the Peloponnesian landscape, and the people met along the way, I owe to that previous failure. Importantly, Panos would play a key role in my current book as would the friendships made and sustained, alongside the romantic flings made and lost. The seeds were planted earlier and I’m glad I safeguarded my archives. 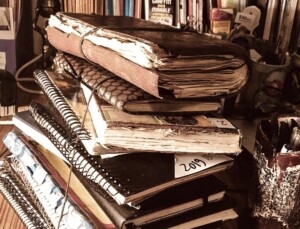 The doyenne of travel scribes, Paddy Leigh Fermor, recommended taking “meticulous details”. The importance of small details can’t be judged until the bigger picture emerges. The meaning of an encounter doesn’t reveal itself till later. The reason why the accumulated journals for Graffiti over Marble, totals a dozen. Each journal contains the scenery but far more crucially carries atmosphere, moods, and emotions. Ticket stubs, doodles, cartoons, news clips, to-do lists, graphic cut-outs: all these items evoke a unique period.

These journals came in many forms from the blue exercise books favoured by Greek schoolchildren, to leather cloth bound together by string and textured paper. Plain notepads with spiral binds have acquired haphazard poetry over the course of time. Journals of all sorts take me back not only to Greece but to my 21st-century trips to India and South America and the places they were used: on a hammock beneath the stars within the Amazon jungle for instance, or in rambling colonial hotels across Rajasthan’s desert cities (in fact, the howl of the monkey subconsciously stayed with me, as the accompanying pages indicate).

So, I advise those starting out on their travels to pen thoughts to focus the mind and senses. To those that have done so, re-read them and you’ll retrace your mind’s journey and maybe smile at youthful ambition. Journals act as sacred objects but they’ll probably contain ill-thought-out ideas, cliched observations, or just plain old rubbish. But I think it was Hemingway no less, who advised a fellow author to delete 95% of the total adding for effect “imagine what the remaining 5% will be”. That’s a ratio worth fighting for.

Graffiti over Marble, A Portrait of Greece in Crisis

Rediscovering Athens During Lockdown Through Photography

Buying a Flat in Metaxourgeio: the Pros & Cons