Having spent his childhood in Greece, Christopher Nicholas decided to buy a flat in Athens and describes the challenges and the joys.

Buying a place in Athens was an easy decision to make. I went to school in a suburb of the city and have been returning ever since, always happy to reconnect with friends on my way to the islands. Most of all I love the ever-evolving array of the city’s cultural and culinary options, and its energy and chaos are the perfect antidotes to my quiet life in Geneva where I live, working for the Red Cross. 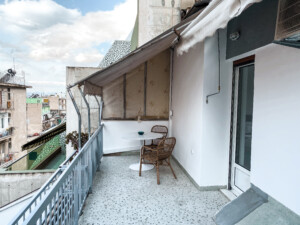 You may be wondering why I chose to create my Athens base in an area that could be described as a little sketchy. It’s artistic and edgy, with happening places, but definitely not one of the capital’s most attractive neighbourhoods.

In fact, it largely came down to budget and convenience. I wanted something central and properties in the historical centre or one of the trendier areas like Mets or Pangrati were not in my price range.

However, I have become increasingly enchanted by my new neighbourhood. I’m discovering a community steeped in a rich and fascinating history. “Metaxi” means silk, and the area got its name from a silk factory built here in the 19th century, which put Metaxourgioon the map. It quickly became a bustling working-class community, home to artisans and small business owners, and suffered a severe decline in the 1970s. It’s had several stop-and-start waves of regeneration since and today the working-class spirit lives on, with old community favourites such as Gefstiki Gonia souvlaki place or Akrovatis kafeneion jostling side by side with alternative cafes, and artists’ studios in disused workshops.

I love the look and sounds emanating from the printing workshop downstairs and hope that the old manual 1960’s presses do not end up as accessories in a new hipster café. But if hipster is what you are after go to Platia Avdi with its sprinkling of achingly cool bars and eateries, like Seychelles and Blue Parrot.

I first flirted with the idea of buying a place three years ago. I found the best way to get an idea of prices and neighbourhoods was the Spitogatos app, which meant I could shop around from the comfort of my sofa in Switzerland. While friends were swiping left and right in search of their perfect partner, I flicked through Spitogatos compulsively looking for my match. After visiting about a dozen places during short trips over, this one felt right immediately – it was bright and airy, on the top floor, with two bedrooms, a large terrace, on a quiet street and near the metro.

With the seal of approval of two trusted friends, one of whom is an architect, I put in a cheeky offer. Initially, it was turned down. Then we struck a deal. However, the owner stuck close to his asking price. Six weeks later I was back in Athens for a 24-hour whirlwind tour of banks and tax offices. Eventually, with all paperwork duly stamped, I arrived at the solicitor’s office for the final exchange. Note: None of this would have been possible without my brilliant conveyancing lawyer, Alkis, who accompanied me every step of the way. Without him, I would have been lost, and it would have taken a year to do what we achieved in a day.

Athens is bursting with wonderful shops, markets, and artisans and there really is no need to set foot in Ikea. I bought local and Greek wherever possible – a good quality bed from MediaStrom, a stylish made-to-order sofa from Fabrica, and curtains from the traditional fabric shops in Aiolou street. I also bought one or two quirky secondhand pieces from Reto, a social enterprise run by people recovering from substance abuse. And one day I hope to be able to splurge at MOFU, a gorgeous vintage design store, in Psyrri.

People say that buying property in Greece can be complicated, but overall, the process went pretty smoothly. However, there was one small sting in the tail. Despite assurances from the estate agent to the contrary, it turned out that the “Doma” (room) on the roof above my flat was inhabited. Worse still, the tenant had put beds on the roof and was charging 5 Euro a night as a place to wash and rest!

During subsequent visits, I crossed tired workers/roof renters in the elevator and had to put up with noises like scraping furniture above, and wafts of late-night souvlaki dinners blowing down on to my terrace. I work in the humanitarian sector and initially let it go until I discovered that the rogue landlord was unduly profiteering. The actual landlord (of the  property above) sent him packing and the space is now rented to a more responsible tenant.

Essentially, I have no regrets and am thrilled to be a homeowner in the city that I love. In this new era where working from home becomes the new norm, I’m hoping to spend more time here. In the long term, I see this as an investment – one that perhaps I can trade-in for a more idyllic spot by the sea when I come to retirement! 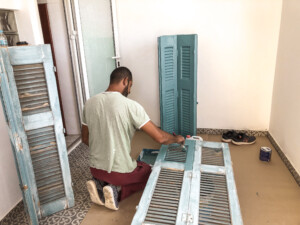 Author's Advice: Journaling is Everything & How to Do It