Philhellene photographer Mark Wilman, creator of a successful six-year project and book ‘Discovering The Beauty of the Cyclades’ describes his first trip on Kimolos.

Mark’s project has been presented by the British Embassy in Greece, the Greek Embassies in Rome and Tel Aviv and the Aquarium of Milan. His evocative photography and writing transport you to the heart of the Cycladic culture, landscapes and colours. And if you want to experience it for yourself, he is available to offer photographic tours. Here he

writes about his first encounter with Kimolos island. This personal story about Kimolos is part of a narrative series created by him especially for IN+SIGHTS GREECE.

Discovering the Beauty of Kimolos

The perlite mine at Prassa, in the north-east of Kimolos between Cape Pouli and Cape Agios Georgios is visible for miles. Especially from the mountainous areas of western Sifnos, such as Fikadia Bay, formed like a pocket in the south-west, to the monastery of Toso Nero, close to Kamares Bay further north. 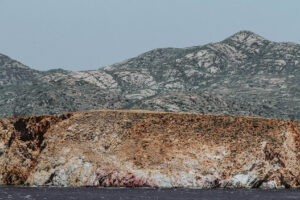 This half erased, dome-like hill, constantly struck by waves at its base, has been clawed at throughout time. First by hand and then machine, exposing an interior of such white purity it resembles a gigantic mirror reflecting brightness of unmatched intensity. This is especially notable in hot summer weather, when the sun is less forgiving. It stands ravaged, a symbol of this island in antiquity when it was a battleground between Athens, ruler of Kimolos, and Milos, ruled by Sparta.

The undulating golden hillsides characteristic of its south and west, charm the journeying 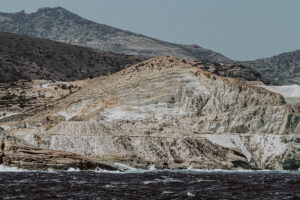 eye that spies them, memorising their blissful details on its way to neighbouring Milos or more distant Folegandros.

Port Vathi is almost one with Chorio, the island’s capital, at the foot of Mount Xaplovouni, like a patchwork of snowflakes surrounded by terraced hillsides and further off rugged mountains.

I have fond recollections of the northern bay of Agioklima, Cape Gerakia and Monastiria Bay, which I saw by boat while searching for spots to free dive.

There were no signs of humanity, just rocks often overpowering in shape and contrasting in colours. Kimolos is a delight to discover and both above and below water.