Globally, people are turning to the internet for ways of living richer experiences during lockdown, exploring many facets of self-help, exercise, motivational and nutrition-based videos and article.

There are now more wellness therapists in Greece presenting their classes online, offering workshops to people in their country and around the world. One of these individuals is Mariela Nestora, a dancer/choreographer who has been teaching the Feldenkrais Method for several years.

Since childhood she was drawn to both science and art, reading encyclopedias about human anatomy and dancing since the age of 4. Her university studies in London focused on Biology, Human Molecular Genetics and Contemporary Dance and Choreography. It was later that she discovered the Feldenkrais Method, while developing her work as a choreographer with YELP dance co. 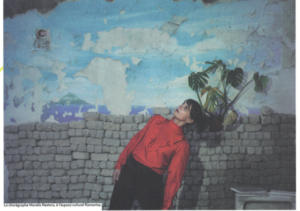 and subtle, yet when I stood up at the end of the class and started walking I felt like I was inside a new body, a body available and light, a body that could dance in ways I hadn’t imagined yet,” she says. Many years later she decided to train in Feldenkrais in Greece under the direction of Ruty Bar and has been working as CFP Certified Feldenkrais Practitioner and as a founder member of the Feldenkrais Center ever since. At the same time she’s continuing her artistic work as a choreographer and researcher. “For me, the Feldenkrais Method® created by Dr. Moshe Feldenkrais (physicist and engineer) is the intersection of the two areas I was interested in all my life: dance and biology. A method that is expanding human potential using movement, as it is educating our nervous system as well as the muscle-skeletal system.”

So what is the Feldenkrais method and why has it become so widely appealing? I tried an online session with Mariella, placing my phone camera in a position where she could observe my body and direct me during the one-hour private lesson. As a yoga-lover, I was intrigued to explore how my movements would affect my body and feelings. I found the technique a little odd at first but surrendered to the process and discovered the powerful impact of small motions in relieving tensions and opening joints. In conclusion I can attest that as Mariela described her own experience, it created a new, more open awareness of my body after the session, despite how subtle and specific the movements are.

Sometimes the quietest actions can lead to the boldest results. “In the Feldenkrais method we engage in a process of updating our movement patterns, releasing habits that no longer serve us. Discovering and learning new options, new behaviours, with greater ease and comfort. Learning to live with greater creativity and self-expression,” Mariela explains. “As humans, we tend to maintain a deeply seated sense of safety based on 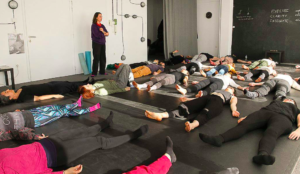 limited but necessary internalized patterns of moving. And we often maintain those acquired ways of acting until we discover a better, more comfortable way to live. Often these old patterns of movement and compensation are based on the necessity that we must protect our self from experiencing old physical and emotional wounds old habits of thinking and moving that are resistant to change. We have to become free of our deeply internalized habits to experience the movement of life.”

Mariela teaches this method in online classes – both group and private, and has found that more and more people in Greece, where Feldenkrais was unknown up to a few years ago – are becoming fans. “The method of somatic education that I teach in group lessons- Awareness Through Movement®- and private lessons- Functional Integration®- is beneficial, whether you are seeking pain relief, dealing with conditions of the central nervous system (multiple sclerosis, cerebral palsy, stroke), or extending your abilities.”

The Feldenkrais Method is not a therapy nor exercise program. It is based on decades of research in physics, neuroscience, biomechanics, learning theory, and human development to give you the means to help yourself and rediscover your innate capacity for graceful, efficient movement. “Expanding the self-image is a fascinating aspect of the Feldenkrais method. After working together for a period of time and once changes settle in, my students have often talked about having a sense of regaining their body or having a new body; and then they want to dance! They often ask me to recommend dance classes to attend and I find it fascinating as it also resonates with my own life,” she says.

I ask Mariela what some of her most interesting discoveries have been using the Feldenkrais method both as a student and a teacher: “When I started working I would say to someone I teach Feldenkrais and I remember people asking me Felden-what? Most had never heard of this method before although in Europe it is often part of the syllabus in Theatre Schools and Conservatoires and in the USA it is well known (Feldenkrais taught there for years). To Greeks it is by now a method more known than it was five years ago- when the first Feldenkrais training in Greece was completed.

To book an appointment for a private lesson (Functional Integration) or join the online group lessons and workshops (Awareness through movement) send an email to info@feldenkraiscenter.org