A 165 million euro investment project on Skorpios island, by Russian billionaire Dmitry Rybolovlev, has been given the go-ahead by the Greek government.

The new development of the Ionian island, formerly owned by the family of Greek shipping magnate Aristotle Onassis, has entered the next phase after a Joint Ministerial Decision was signed on December 31st, 2020. 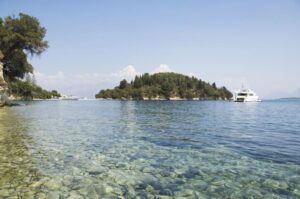 According to reports, the construction and operation of the “VIP Exclusive Club” are set to proceed this year and scheduled to be completed in 2024. The project is expected to create new local jobs and benefit the Greek economy.

The high-end club will include a 5-star luxury resort, an amphitheater, a new helipad, a large road network, the creation of farms, and other infrastructure and leisure amenities on 161 acres of the island. Sports facilities will also be added, and the island’s ports will be expanded.

In addition to the main building of two levels with seven luxury suites, another 12 new luxury villas will be built between 500 to 1,200 sqm. each. Also, the existing old coastal houses on the east and south side of the island, where many celebrities had been hosted in the past by Aristotle Onassis will be renovated. 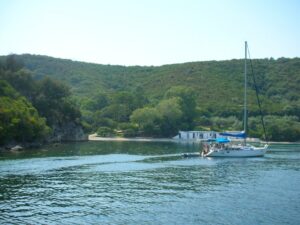 Skorpios is a private island in the Ionian Sea off the western coast of Greece and just to the east of the island of Lefkada, right across from Nidri village. Despite its small size, this island has become famous and popular after it was transformed from an unspoiled paradise to a hot destination for celebrities.

Skorpios was bought back in 1963 by Aristotle Onassis for 3 million euros. He married Jackie O Kennedy, on the island in 1968. The couple loved Skorpios and had a clear vision of what they wanted it to look like. Onassis brought sand from the shores of Salamina and turned the coastline into soft, sandy beaches. He also planted thousands of trees, to create a lush oasis. Onassis also built villas and provided 5-star accommodation to his wealthy guests.

Throughout the years, an array of international celebrities and socialites, including Frank Sinatra, Marilyn Monroe, Winston Churchill, Grace Kelly; and more recently, Beyonce and Rihanna, have stayed on the private island.

After Onassis’ death in 1975, his daughter Christina inherited the island, which was in turn given to his granddaughter Athena in 1988, who sold it for more than 100 million euros. Since 2013, Skorpios belongs to the daughter of Dmitry Rybolovlev, Ekaterina.