For a kafeneion, it is uncharacteristically quiet. But patrons don’t come to Panellinion to argue over politics or football (or both simultaneously as in many cases the two are inextricable). Nor do they come to indulge in the counter-culture ambience of other area cafés. They come to play chess. And every single table in the café is set up with a chess set, ready for the contest. 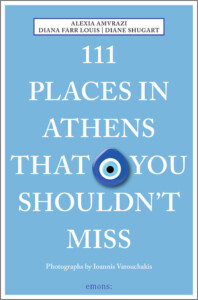 Panellinion isn’t the sort of place that attracts passersby. Scuffed tables, a marble mosaic floor typical of 1950s and 1960s kitchens, stiff wooden chairs with flaking paint, and, at first glance, a clientele of mostly pensioners. The coffee is almost exclusively Ellinikos, individually brewed over a gas flame. The décor is mostly framed photos, including one of the original, far grander premises at the corner of Benaki Street that it occupied for the first eight decades after its founding in 1885. Pride of place among these souvenirs of its history is a magazine spread from 24 August, 1992, featuring Gary Kasparov, the Russian former world chess champion, who not only stopped by Panellinion but simultaneously played – and won – 30 games against the café’s regulars.

Chess isn’t just a game, but a philosophy. Or, as the Emanuel Lasker quote tacked to the service counter notes, ‘On the chessboard lies and hypocrisy do not survive long.’ As a game, it enjoys enduring popularity in Greece, with active clubs throughout the country. Panellinion is more of a haven, a place where players go to share their love of the game, rather than compete for a title. Like the décor, this love for chess has remained steady over time. Perhaps the one thing that has changed is that the coffee house no longer charges customers by the hour so they can continue to contemplate the board without anxiety about running up a bill. And there’s no rush to leave: Panellinion will stay open until the final checkmate. checkmate, even if it takes hours. Unlike our fast-paced lives, chess requires strategy and patience.

Tip: The old antenna atop the Law School Library on the corner of Solonos was used for Morse code transmissions to the government-in-exile in Cairo in World War II.

111 Places in Athens That You Shouldn’t Miss can be found at all major bookstores worldwide as well as online at Amazon.

Cycladic Diaries of a Photographer: Next stop, Sifnos

Pool Your Cinema Returns at the Hotel Grande Bretagne