Philhellene photographer Mark Wilman, creator of a successful six-year project and book ‘Discovering The Beauty of the Cyclades’ describes his first trip with Sifnos.

Mark’s project has been presented by the British Embassy in Greece, the Greek Embassies 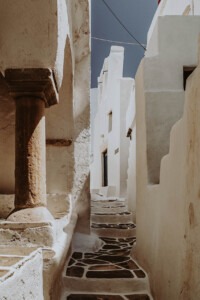 in Rome and Tel Aviv and the Aquarium of Milan. His evocative photography and writing transport you to the heart of the Cycladic culture, landscapes and colours. And if you want to experience it for yourself, he is available to offer photographic tours. Here he writes about his first encounter with Sifnos island. This personal story about Sifnos is the next part of a narrative series created by him especially for IN+SIGHTS GREECE.

Discovering the Beauty of Sifnos I escaped the day I arrived that first time in Sifnos having already paid for a room with a view in scenic Kamares. The intention had been to dive, setting up the inflatable boat there in the port, but without hoisting equipment it couldn’t be achieved. There were no sections close enough to water level to follow the usual procedure where I’d walk with the engine into the sea and attach it to the stern. This meant those extraordinary rocky inlets and bays on the island’s western side, the ones seen from ferries, were now inaccessible.

Elsewhere, the roads always ended at breathtaking sandy beaches, each entailing excessive swimming to reach areas of depth where marine life would be sufficiently evolved. The tiny, deeply-set, ancient port of Hersonissos in the north was the only exception, and I swam outwards in the direction of the open sea for a couple of hours until it became clear that my return would be difficult and exhausting if the current picked up. So I left defeated, not returning for twelve years.

We returned in June when I was photographing for my project. Much of the emphasis had, in the early stages, been placed on Roxana, the female figure in my photos, with a quite remarkable result. The centrepiece of the work, Lost Lady Of Sikinos, Neiko, had seen us anticipate by two years one of the most significant findings in modern Greek archeological history at the exact location, following the precise theme: the tomb of a noblewoman buried hermetically beneath the interior of the monumental church of Episkopi in a remote part of Sikinos in the 2nd century A.D. Orientation was now focused entirely on researching landscapes and sea views without transportation, just on foot, to capture as much detail as possible. We trekked over 300km around Sifnos; through valleys, up hills and over mountains. The ancient mining area at Achladas Bay, where Agios Sostis church stands on the island’s north-eastern side was fascinating, its wide-step antiquated path an experience in itself.

The Chess Café in the heart of Athens

Traditional Kafeneia of the Cyclades