The second largest white truffle in Europe was found in Greece? It’s usually a different kind of headline that boldly confronts readers, informing them about something or other being unearthed under the diverse and ancient Greek landscape.

Yes, truffling in this country is now on the map and gaining momentum, happily being embraced in modern Greek cuisine as well as jazzing up old staples.

The latest estimates are that between 2,000-3,000 Greeks are involved in the hunting and production of these edible treasures and that Greek truffles are now being exported far and wide, with some varieties regularly topping 3,000€ per kilo.

Quite a tidy sum but bear in mind that truffle hunting is no walk in the park.  It involves hours of muddling through the undergrowth of low-lying mountainous regions. Also, it requires a sound local knowledge of the areas likely to yield up their white or black prizes.

Where can this be done? Well, anywhere with wild oak or chestnut forests at the foothills 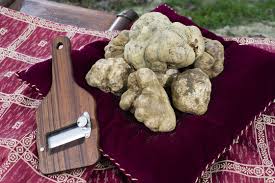 of mountains, so just about all over Greece, from Crete to Meteora, Olympos to Komotini.

This is convenient although adding to the challenge, the conditions of forests conspire against human seekers so that often wild boars (amongst others) get to the prize first. So good are they at finding these aromatic gems that we train their hairless pink cousins to help us with the dirty work; pigs have a remarkable sense of smell and can root out a truffle up to three feet underground.  But more commonly, man’s best friend is trained as the primary scout. A decent (but by no means exceptional) dog can set you back €1,000, but compared to a pig it can be more fun, easier to house and with less food consumption, as far as I know. 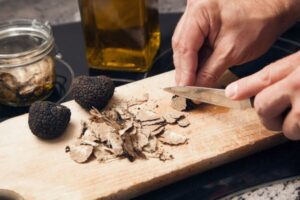 There is another way to get truffles and that is through cultivation. Excellent! Problem solved. But not so fast; the best tree to cultivate for this purpose is the mighty oak, which takes 12 years to mature and, which is when the farmer can gather her first harvest. A long time indeed, and also a hit and miss process, as some inoculated saplings may never produce a single truffle. Not that I could tell the difference of course, but I would prefer to eat the hunted version, as there is something adventurous and excavatory about it that definitely adds flavor to my intellectual taste buds.

Having said all this, it would be remiss of me to not reference an ancient yarn from the heyday glory times of my ancestors: The ancient Athenians loved truffles to the extent that they gave citizenship (no small acquisition) to the sons of Xerippo for coming up with a new recipe for them! Unfortunately, the recipe in question has been lost to the ages, which is rather frustrating considering it was great enough to have such an honour bestowed on the willing chefs.

These aforementioned ancients called it Hydnon, and indeed “hydnology” is the science relating to truffles. In Latin it’s called “Tuber” which is the official term, where as a number of Mediterranean cultures (including Arabs, French and Spanish) conspired to give us the word ‘truffle’ the handle commonly used today. Furthermore, in Plutarch’s accounts, truffles were created by the combined action of water, heat and lightning leading me to conclude that it was considered as a gift from Zeus himself. Wherever the actual truth of this incredibly pungent food lies, it certaibnly has fascinated humankind and animals alike throughout the ages and will surely continue to bedazzle our tastebuds for as long as it exists.

Here are some exemplary Greek truffle product you can find online now:

Dirfys is known for its excellent mushroom and truffle products, ranging from truffle gruyere to truffle mustard.

Eklekto sells top of the range White and Black Truffles.