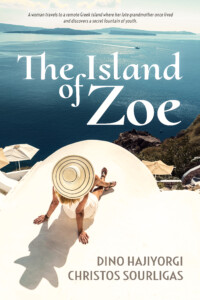 Sourligas only recently went from a lifetime of filmmaking to writing books. Here he’s writing for us from Canada, where he has spent most of his life and is currently on tour with his #1 Bestselling cookbook ‘My Big Fat Greek Cookbook’. Not much of a cook himself, the highly successful book was written as an ode to his mama, as a meaningful and celebratory way to preserve the treasure-trove of recipes she created when she was told she had only months to live.  In the time Sourligas has been away from his beloved Greece, which he visits as often as possible, he was also busy writing and releasing yet another genre of book. ‘The Island of Zoe’ is a romance-fantasy novel set on a mythical Greek island, which he co-penned with Athens-based and published author, Dino Hajiyorgi. Here, Sourligas shares the experience of how it all came to be. 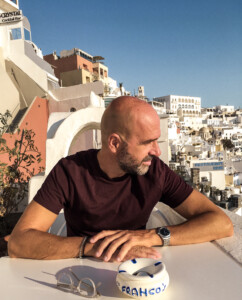 I am a storyteller at heart. And, a shameless romantic. When most of my male teenaged friends would listen to heavy metal and watch blood and guts flicks on VCRs in their basements, I would sneak off to the movies with the local girls to ogle Molly Ringwald and her latest offering. From ‘Pretty in Pink’ to ‘Sixteen Candles’, I couldn’t get enough of girlie romantic comedies and coming-of-age flicks. And when the boys would catch wind of my transgressions, they would knock me on the side of my head.

You see, I grew up in the rough and tumble, a working-class immigrant neighbourhood of Park Extension in Montreal. And I always had to be quick on my feet while growing up. The moment I stepped outside my home I was instantly bullied—we all were. Thus I had to learn how to make up a story, to come up with a good joke, to perform a song and dance. And I was a fast learner! As the court jester, I always made it out alive. From those experiences, I escaped into my head, creating all sorts of stories and before I knew it, I was telling stories to the masses.

I have since written, directed, and produced two feature films; ‘Elephant Shoes’, ‘Happy Slapping’ – the former being a Canadian romantic comedy sleeper hit. After making ‘Happy Slapping’, the world’s first feature film completely shot on smartphones and my initial foray into the thriller world, I returned to my original love of romance moviemaking. 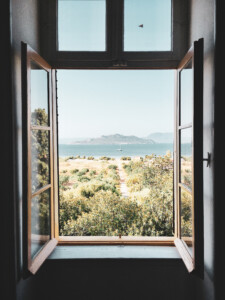 So I set out and wrote a film script based on ‘The Island of Zoe’. And when I shared it with a writer buddy of mine for comments, Dinos Hajiyorgi, he immediately fell in love with the project. We then decided to take turns writing a novel from my original material with the idea of releasing the book version first, which would then allow the promotion of an eventual feature film.

‘The Island of Zoe’ tells the story of 30-year-old Greek American Zoe who travels to the remote (imaginary) Greek island of Petra, where her late grandmother spent her youth. As she meets the locals and gets to know her grandmother’s childhood friends, Zoe unravels a shocking secret: time stands still on Petra, and no one on the island has died in 70 years. As the locals struggle to conceal the truth, Zoe begins to fall for a local priest, who takes her to the heart of the mystery, changing the fate of the island forever. 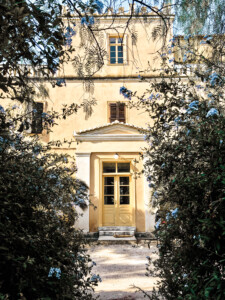 Of course, my roots inform and inspire my work. My family is from Arcadia, Greece, which epitomizes the life of the simple shepherd. It’s the life idealized by Romantic poets like Lord Byron, Shelley, Keats. Nature. Pasture. Utopia. Where the wilderness is unspoiled and the mountainous landscape so vast, it forces you to connect with the bounty that is life. Not a single resident of my father’s town has ever died of cancer, nor of heart disease. If you walk through the town’s cemetery, the average age of death is 95. It’s isolated as hell. The mountain roads are treacherous. Cell service is difficult, Wi-Fi non-existent. And the friends who I bring along for my yearly summer visits never want to leave. This is exactly the feeling and emotion Dino and I have captured in ‘The Island of Zoe’.

And when the global COVID lockdown occurred, we thought it was the perfect moment to 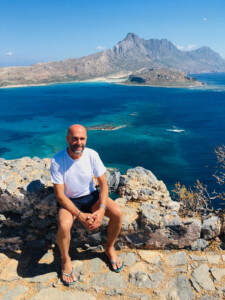 launch the book online for free on Wattpad — the world’s largest website and app for readers and writers with over 80 million users. Dino and I simply wanted to share ‘The Island of Zoe’ with the rest of the world, especially since Greece is out of reach for North Americans for the time being. With summer right around the corner and lockdown restrictions still in place, readers can get transported with Zoe to the sunny exotic Greek islands while lounging in their own backyard.

As for finding a proper publisher to pick up a copy of the book… For the time being, most businesses are being increasingly cautious about resources and consequently are not really boarding new projects. While we wait for things to pick up again and hopefully find a publisher, we look forward to reaching our readers in the online book community and use our imaginations to bask on a Greek beach!

‘The Island of Zoe’ is now available for FREE on Wattpad: wattpad

Delivering Unique Greek Trinkets and Treasures to the World