Οwning property in Greece brings with it some exciting prospects but what exactly do you do with it?

Greek laws are complex, the market is constantly changing and finding the right people to work with is a key challenge in an economy that lacks the stability seen in many other parts of the world.

The action plan depends on the type of asset owned, whether it is an apartment or a block of land. Those who have in their possession a stand-alone home or an apartment may have less to do but face many factors when making a decision.

With the arrival of Covid-19, the trend in the market right now is clear.

Home owners in Greece have been removing their apartments from short term rental platforms at a fast pace and putting them up for regular long-term rents. The number of visitors looking for a place to stay in the country for a few nights has dried up amidst the pandemic and not expected to see any strong growth any time soon.

The increase in supply has driven rents lower in some areas though prices are generally holding ground. Data from home classifieds site Spitogatos.gr shows that the price of renting in central Athens in the second quarter of the year eased 0.64 percent from the first three months of the year, to 9.38 euros per square meter. Having a place in southern Athens, in areas like Glyfada and Voula, may fetch you 10.37 euros (sqm), while in the northern suburbs the monthly rate is 8.46 euros (sqm), according to the site.

Those in possession of a block of land, have more work to do.

Architect Katerina Sirouni tells IN+SIGHTS GREECE that to get the ball rolling, the first 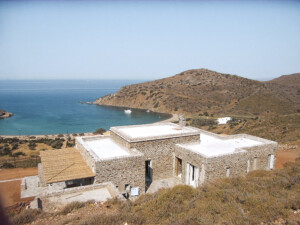 step is the due diligence process.

“In the event of inheritance, I would recommend them to consult with a notary public to guide them on the steps needed to be taken as well as inform them on any possible hidden surprises,” she says.

“After dealing with the ‘not so fun’ challenging process of ensuring ownership rights, the next step is to answer the question of what to do with the land. Factors such as up-keeping expenses need to be considered if keeping the property but it’s important any decisions should not be based on emotional connections,” she said.

Whether a land owner wants to build their own Graceland in Greece or looking for something smaller, there will be large demands on their time and budget. Some estimates place the cost of constructing a home at about 1,200-1,300 euros (sqm).

“It’s important to connect with your architect and discuss all the possible challenges and contingencies involved from making design choices to maintaining a realistic budget. From ideas to completion, there are three main phases to follow. Based on the zoning restrictions of what can be built and the factors of the plot such as size, shape and orientation, we work on a concept design which leads to the final design layout,” says Sirouni.

“The next phase involves issuing the building permit with a team of other engineers needed to implement the project, structural and mechanical. The final issuing may vary, depending on specific approvals that may be required. Once the permit is issued, we’re all set to go,” she adds.

A journalist for nearly two decades, Stelios has covered everything in the Greek capital, ranging from the politics and the economy to dancing architects and the souvlaki. Writing is his passion. After covering Greece for The Wall Street Journal and Reuters, he is now narrowing in on real estate and architecture. He believes that homes are more than a place to eat and sleep in and that light, design and space shape lives, along with the features of a building. Originally from Melbourne, he knows how to break down complex Greek issues into easy to understand stories for a foreign audience. He writes on real estate and the economy on his blog GreekGuru.net