Philhellene photographer Mark Wilman, creator of a successful six-year project and book ‘Discovering The Beauty of the Cyclades’ describes his first trip on the island of Folegandros.

Discovering the Beauty of Folegandros

Every visit to Folegandros is an adventure for me: the climbs, the dives, the treks, the views. One trip remains distinct: my search for big groupers. As a freediver, the Cyclades waters are truly a dream, their turquoise and blues encouraging calm.

It began in Ambeli Bay up in the north. Late afternoon the day I arrived the sunlight was  September orange. No one was there. Swimming past an island of rocks made of extensions like a village of steeples submerged, I went on till it got dark, deep and lonely.

This was the place. Watching for signs, I inhaled a last time and descended into the 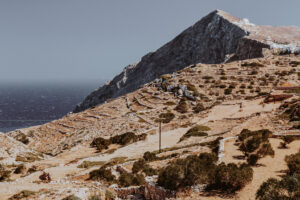 depths kicking my fins and pinching my nose for my ears, my eyes scrutinising the view upside down. I’d done it before on many occasions though not here, not in Folegandros. The current was strong, a warning for sure, too strong for safety, I decided.

Vorina, my choice next day, again to the north just beyond Hora, follows a single slim path through high golden grass over terracing so sheer the return’s a question for much of the way.

Once by the sea, I glanced back to where I’d started from, not thinking I’d see the car so far away. So on with the gear and into the waves my search for big groupers continued. Swimming where the village is perched with Panaghia still higher took time, my metre-long fins doing their best all the way. 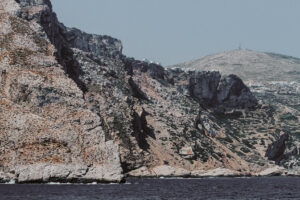 What seemed close was far. And then I saw it static in front, except for its wings, unperturbed. The closer I got, the more it appeared it would leave in a flash, but it didn’t. The grouper remained there, curious.

At an arm’s length away, I ceased all movement. We stared at each other, two creatures from earth, sharing the same facial features, though mine hidden, except for eyes that she trusted. A minute went by, what should I do? We’d looked at each other acceptingly; that was enough.

Reluctantly leaving after a blink, the sound of a boat approaching came, loud voices onboard to adding to the noise. Turning a corner, I saw them in front, thrashing around, voicing their excitement with glee.

On I went as quick as I could back to the beach where I’d started. It took ages. Arriving at night, the search for my stuff by the light of a torch began.

All packed away and ready to climb with no energy left I felt laden. The path in the dark, a vertical challenge not to forget, was exhausting. But what an experience.