An unforgettable multi-sensory discovery of Greece through endless, dreamy summers aboard beautiful yachts…

Marina Zeas, once the sole point of reference for yachting in Greece and departure point for flying dolphins, is now just one of several impressive marinas near Athens. For me personally, growing up in the Greek yachting world, Marina Zeas was the epicenter of my summer life and the launch point for exquisite nautical summer memories. 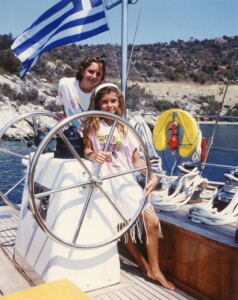 Yachts as My Homes on the Sea – Families Included!

I’ve been lucky enough to have had a father who ran his own yacht charter business in Greece. For me, that meant summers amidst the harmonious bustle of the comings and goings of yachts and international guests. He began Valef Yachts in 1969, long before I was born and before he met my American mother, Kathy. He had already acquired four yachts, which my sister and I were fortunate to have grown up on. The beautiful and unique Prince de Neufchatel, with its black wooden hull and yellow detailing, the Doxa I & II, motor-sailers as well, with white wooden hulls and yellow and blue detailing, and the motor yacht Lady K. Each had its own charm and atmosphere, making each trip special. A big part of those experiences was the crew on board, who became like family. 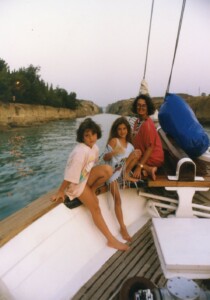 Onboard Doxa I, I fell in love with Jenny’s moussaka – and with her beautiful blue eyes. I loved to peer down into the galley, accessible from the side of the yacht, and inhale the aromas churning out from below to guess the next meal. Jenny was married to the captain, Tassos, who looked like the most classic and brawny sailor from a comic novel from the ’60s. She was his classic Betty-Boop pinup girl, serving up amazing homemade Greek cuisine. Her flair for breakfast was chocolate and orange cake which I indulged in as a morning ritual, special to Doxa I.

On Doxa II the crew was one family: Captain, cook, sailor, and hostess. Roula, the young daughter, would make up card games for us to play as we slowly cruised between islands feeling the rhythmic waves beneath us, carry us onwards to the next port or private cove. At night my sister and I would entertain my parents’ friends and the whole crew with ‘Disco Doxa’, us dancing brazenly in the strobe light set up at the deck fore, to popular Greek and American hits. I dragged my introverted sister to perform beside me, as laughter and applause were guaranteed from the ouzo-accompanied adults.

Onboard the Prince, I loved to tuck into my parents’ cabin for siesta time. The large bed took up half of the cabin, wall to wall, and had a glowing star motif on the ceiling that twinkled down at me as the rock of the boat moored in a bay lulled me to sleep. Lady K offered another feeling; a sea breeze in our faces and the excitement of the next destination rather than the dream-like sinking into the journey offered on the motor-sailers.

Childhood Formed By the Sea

The days were long aboard the boats; all day in the sun and evenings in bustling ports dashing out for ice-cream parfaits or amidst pine trees and screeching cicadas when at anchor in coves. The sound of the sea lapping onto the boat side was like a metronome accompanying me to sleep. The whir of the boat engines in the early morning as we set off, was my alarm clock.

On the islands I remained a forever tourist in my own child-like right, picking up 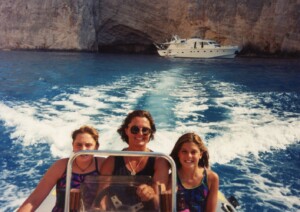 souvenirs at each destination. A porcelain pot with wax-perfume in the commercial ‘Opium’ scent, or a fuzzy little donkey figurine with baskets on his saddled back, or night-lights made of small shells in the shape of a windmill.  Kittens, live kittens, scooped up on islands like Hydra were rare souvenirs, even for just a night, to the dismay of our parents.

Beach cover-ups always – fringed pink cotton shirtdresses with GREECE written on the front or blue and white gauze gowns with crochet at the neckline, a Greek classic.

Sitting at the yacht fore listening to sulky ’80s music made me feel like a sailor in my destiny, the open orange horizon before me, into the sunset, Chris Isaack’s Wicked Game or Madonna’s La Isla Bonita, and me with the waves and occasional dolphins.

When not at sea and exploring the islands, I was on the back of my dad’s moto, running errands with him on the marina docks or the port police, poking around the office, or occasionally greeting clients with him at the airport.

The guests from abroad were portals into many new universes, as was the horizon at sea. My Mediterranean summers were fuel for dreaming,  where growing three inches was common and imagination expansion was guaranteed.

Scent of gardenia, taste of salty ‘maridas’, and the crooning Greek music peppered my days and nights of total adoration of Greece as a country, culture, and people and my life in yachting.

The yachting lifestyle feels like part of my DNA, and is now a science to me, as I run the business with my sister, here in Athens. My parents wondered how we ended up here and them back in the USA, enduring harsh Philadelphian winters. It is no wonder to me anymore, as Greece is a place where dreams come true each summer, afloat in the big blue. I am happy to contribute to that tangible bliss, offered up to anyone willing to gaze into the horizon, and simply jump in.

4 Beaches in Rhodes that Can’t Be Missed