What’s Methana? Where is it? And why did famous BBC journalist John Humphrys and his son Christopher build a villa there?

As the son of an ambitious and popular journalist and as a successful cello player, Christopher Humphrys has lived and travelled all over the world. But it was in Greece that 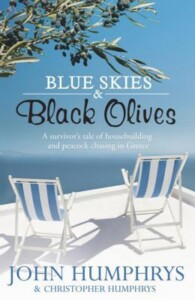 he plunged his roots. He settled here some 30 years ago to work for the Athens Concert Hall’s Camerata Orchestra and become a (Greek Orthodox-baptised!) doting father. Here he writes about a place even regular visitors to Greece rarely hear about, the Methana peninsula. It was there that a decade ago he and his dad took on the somewhat audacious (as humorously described in their book ‘Blue Skies and Black Olives’) feat of building their villa in a sleepy village. Building the house was only the very start of an adventure and love affair that Humphrys writes about here. He describes the powerful connection that keeps growing with this volcanic landscape famous for its orchid varieties and sulphur-infused seashores, that is as unique as it is naturally magnificent, as close to Athens and as far away from urban reality at once. Readers are also treated to some excellent insider tips for their next trip over there.

The key was in my hand. I had been waiting for this moment for a long time. Many months earlier my father and I spent a day in February walking half of the Methana peninsula. On the way back to our hotel on Poros Island, I suggested we stop to have a look at one of the properties for sale in the region. Dad thought he’d come on a walking holiday. I had other plans. I had spent weeks scouring the area from Epidavros down to Porto Heli for somewhere that he might just think of investing in. Somewhere for the Humphrys clan to gather for summer sun. Not to mention somewhere conveniently close to my Athens apartment. 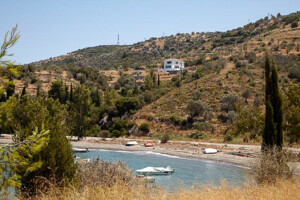 This particular place looked interesting to me. An old cottage sat nestled in a lemon grove just off a pretty pebble beach. From there the land rose steeply through a well-planted wood to the foundations of a villa at the top. It was hard going fighting through the overgrown vegetation to reach the top but when we did we were well rewarded. The fiercely bright February light glittered on the waters of the bay of Epidavros. The bay itself was perfectly embraced by the mountains of Methana to our right and the mainland to our left. These mountains had a dusting of snow along their ridges, shimmering in the magical light. Even I, who knew the region well, wasn’t prepared for the raw beauty of the view.

My father is not a compulsive man. At times he could even be called pedantic. But I think it took him about thirty seconds to decide that he just had to have this little piece of paradise. 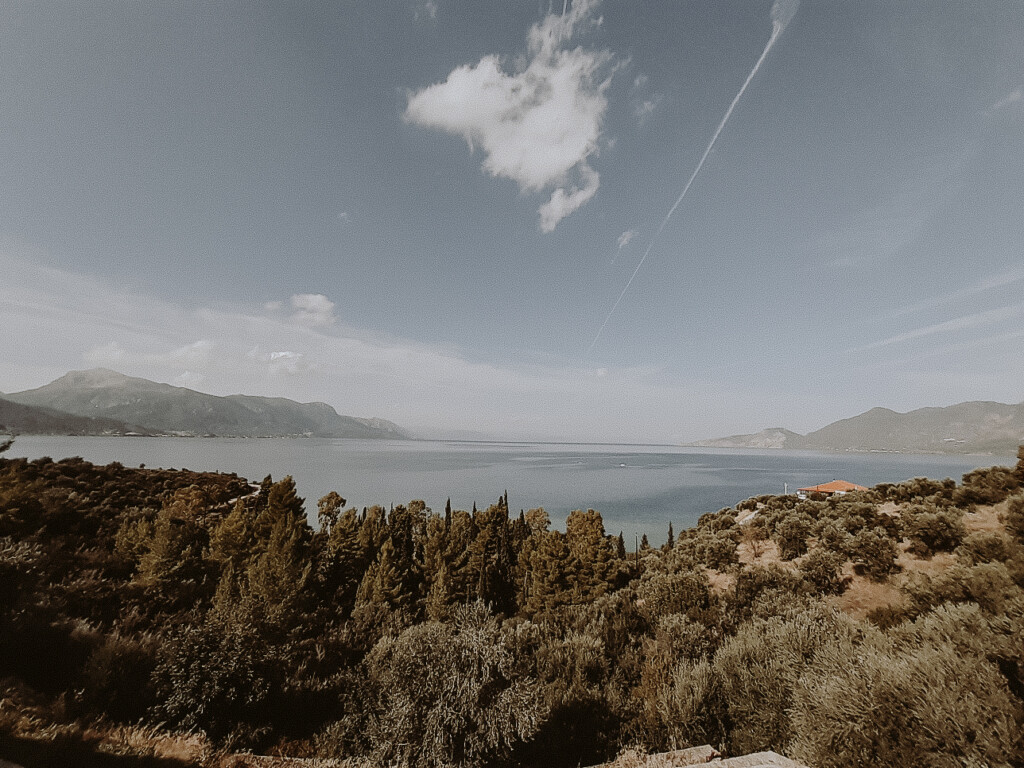 This was why my waiting was now over. The property was ours and I was going to enter the old cottage for the first time. It may sound strange to buy something without looking inside but Dad lived in London, I was busy in Athens and anyway the villa, once built, would be the real prize. So I opened the door having no idea what to expect.

It was love at first sight. The cottage had been built by an English lady and had been left with all the furnishings. She was an artist and loved the light. All the furniture was hand-painted and decorated by her and dolphins featured prominently. The colours were gorgeous, combining the blues of the sea with the greens of the olives. I should have stopped at admiring the décor but felt an urge to investigate further. What else had been left behind? On opening the first cupboard I instantly found out.

Staring at me in shock and, it seemed to me, with an air of faint outrage, were six pairs of beady black eyes. Mother rat and her five children. I closed the door quickly and calmed down a bit. Surely just a lone family finding shelter somewhere warm and dry I reasoned. There were a lot of cupboards. After opening about half of them the truth dawned on me. We hadn’t acquired a cottage by the sea so much as a full-scale resort for rodents.

This may be the reason that I came to know Methana so well. Somehow the romance of 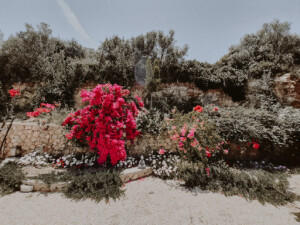 the seaside cottage had slipped a little. Pretty Poros has its charm as a typical Italianate Greek island but Methana’s attractions are more elemental. The peninsula straddles the same fault line that blew Santorini to bits in 1600BC. Methana’s big eruption happened around 230BC and was witnessed and written about from Athens. The result is unlike anything to be seen on the surrounding islands. It is a rough and rocky place with its own unique ecosystem.

The main town of Methana is predictably called Methana. On approaching round a windy seaside road you can smell the town before you see it. When it reveals itself the reason for the odour is obvious. The sea isn’t blue but white. White with hydrogen sulfur. Depending on the wind or lack of it you can normally get used to this quickly, giving you time to admire the lovely 1930’s architecture of the thermal baths. If they are closed, follow the locals– the sea across the road from the baths is a similar colour, with the added benefit of being completely free. Many will swear by the therapeutic benefits of this strange smelling water, from curing arthritis to clearing clogged lungs. Friends of mine remarked it did wonders for their skin.

Yet for me, the magic lies away from the sea. Take the road up from Bathi, a small harbour with fabulously cheap fish tavernas, and after climbing through lush pine forests you will come to Kammeni Xora, literally meaning Burnt Village. Everything there is built from volcanic rock and many of the houses sit next to boulders as big as they are. 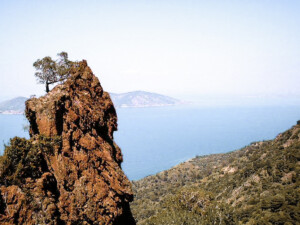 It’s impossible to imagine the power and force that sent these giant rocks tumbling down the slopes of the erupting mountain. Rising above the village is a lava field that more resembles a lunar landscape than a Greek island. Below the village though is a perfect illustration of how nature can not just destroy but nurture. The rich volcanic soil has been put to expert use producing a wealth of fruits, nuts, and vines built on terraces that have survived centuries. This is an ancient feeling place and life is still lived in the old ways. Donkeys are more common than tractors and produce is still stored in the many caves rather than industrial fridges. 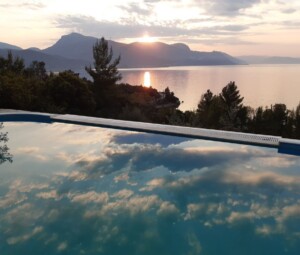 Continuing up the road you will find the start of a footpath leading to the peak of the mountain and the volcano’s mouth. At the top, you will feel like the king or queen of the Argo Saronic region. Spread below and stretching all the way back to Athens on a clear day, are Angistri, Aegina, Salamina and a host of smaller islands. Volcanoes come in many shapes and sizes. You won’t find a smoking crater here but rather a lava dome with an opening in its side. If you are brave enough you can climb in and stare down to the depths of the great fissure. However many times I do this it never fails to excite and terrify me in equal measures, as if I’m staring into the jaws of a slumbering dragon. Will this be the time when it wakes again?

You may wonder if we ever did finish building the villa with its stunning views. Well, we have happily been spending time there for ten years now, but I will never admit to it being finished. I just have this feeling that the day I say “It’s done!” will be the day that Methana wakes again, destroying years of toil in an instant. Still, at least that would get rid of the rats. 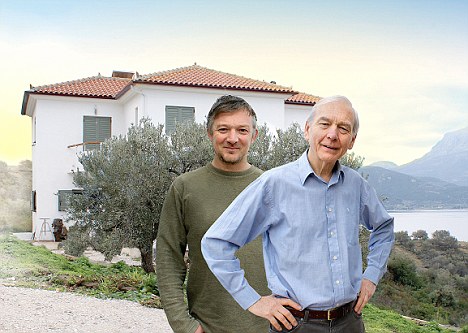 Our Ultimate Travel Guide to Mykonos

Why Greece’s Simple Koulouri is Such a Popular Snack