Juliano Kaglis is an artist whose work commands attention. It sets itself apart from other work with a sensuous grace and unique flair that can only come from a source of honest and sincere devotion.

Already a well-established and recognized artist, he has exhibited for many years 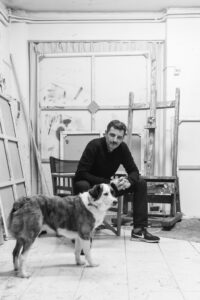 with Ekfrasi Gallery and the Alpha CK Art Gallery in Cyprus with eleven solo exhibitions and various group exhibitions around the world. He was awarded a Fine Art Scholarship from the Greek State Foundation and in 2013 he was awarded the Distinguished Greek painter award by the Academy of Athens. His works are continually sought-after by collectors and included in numerous public and private collections.

There was a light beige curtain billowing in the September breeze in the doorway of Juliano’s atelier. Not sure if I’d made my way to the spot, so I decided it had to be correct since the smell of paint lingered in the air and I discerned the vague outline of the base of an easel. Juliano’s studio is like most, a warm haven of personal artifacts and items that inspire him as well as being a live and vibrant platform of creation.

It’s always endearing to see what artists place on their studio walls aside from their actual work. I smiled as I took in a strikingly well-made poster from a Rodin exhibition, a postcard of Picasso’s Don Quixote, a poster for a show by Philip Guston, a clipping of a painting by Lytras pinned up and many other little odds and ends that make a studio personal. Paintings were scattered all around the floors, against walls, stacked in corners and turned every which way, some of which were finished and some not. 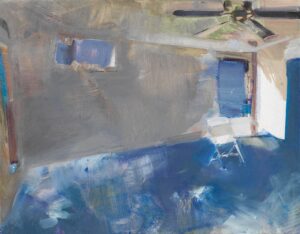 Juliano is what I like to call “an artist’s artist”. He was clearly a warm, genuine and not out to consciously impress or particularly guide my impressions consciously. After settling into a chair to listen and watch, I was slowly able to hear more about his life as an artist and of course to see many of his mesmerizing works of art.

Juliano was trained classically at the Athens School of Fine Arts in the atelier of Pastakithis, Gavathas and Milios but he explains that his love of art began as a child rather innocently and coincidentally without anyone in his family steering him in such a direction. He noticed paintings in other people’s homes and then was particularly struck one day after a visit to the National Art Gallery by a painting by Gyzis. This painting provoked his devotion and long-lasting commitment to art. He was intrigued by old

masters like Monet, Picasso, Rodin, Toulouse -Lautrec and also was significantly influenced by the work of Tetsis whom he met on several occasions. His work is gestural, deeply sentimental and evokes in the viewer a need to see more clearly. A need to understand….in the way that one seeks to solve a puzzle. The work is both abstract and sometimes figurative in a blurred out or other times choppier brushstroke, but the paint is layered and shows signs of multiple applications, corrections and build-ups. Juliano told me that it is often the case that his paintings go through many phases and evolve into their final state after numerous “attacks”.

He laughingly cites the words of Gustave Courbet who said, “Look at your art like it’s your worst enemy.” He normally spends time scraping off paint, re-applying and again applying, until the final work gets to a point where he feels it is ready. Usually many pieces (as many as 20 or 30) of art are underway at once and Juliano explains that it takes time with eyes away from a painting in order to go back and see it clearly again and again until the desired outcome is established.

The work varies and aside from the moody and deeply atmospheric works which to me are his very own “landscapes of abstraction”, there are also loosely portrayed figures in 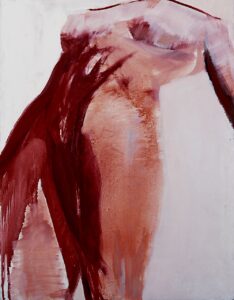 smokey, ethereal tones. His portraits are rendered (each in different ways) and certain paintings make reference to very specific themes that interest him such as magicians or acrobats.

At one point, Juliano brought out a particularly moving piece in deep blues and greens and in the center of these forceful strokes was a delicate and fragile stone sculpture. I inquired about this piece and he responded by telling me that he holds a particular interest in old monuments and sculptures in parks. In that piece he captures the blend of strength and sensitivity which emanate from his artwork in general.

Coming from a restless spirit driven by passion and a thirst to understand both his own emotions as well as to open up a new window for viewers to revel in, his work is sure to continue to marvel. 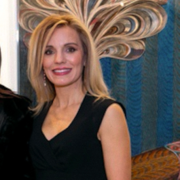 Joanna is an art consultant specialising in international Post-War & Contemporary art. Her work includes art gallery experience, private & corporate art sales, Estate management, art journalism, museum exhibition curating, art book direction, & art consulting. Since 2004 she has co-managed the Estate of her father, the artist NONDA (1922-2005) for which she has organised numerous projects as well as four solo museum exhibitions of his work. In 2001 she founded Morgan Art Consulting in New York City, & later ran the Athens branch, hosting several exhibitions of international contemporary artists. She continues to advise art collectors throughout the US & Europe & currently lives & works in Athens.