The Holy Monastery of Archangel Michael Panormitis is one of the most popular attractions on Symi island. Located on the sea front of the tiny village of Panormitis, the Monastery was built in the 6th century, but what stands today is the restoration of the new building of the 18th century.

How to get here

You can arrive via a ferry or excursion boat from the port of Symi or from the island of Rhodes. If you are already in Symi, you can also catch a bus or taxi from the town, which takes about an hour.

A Venetian-styled building with its high baroque bell tower, the facade of the main structure is white and it stretches along the coast on either side of the main gateway. The inner courtyard has its own church along with some pebble courtyards.

The interior of the church is covered with iconography (of particular interest is the ‘fall of the angels’ mural at the back of the church) and is decorated with very elaborate chandeliers. Many baptisms and weddings take place here throughout the year.

There are two museums– a folklore and a religious one. One houses ecclesiastical art, and is rich in exhibits like pontificals, silver icons, Russian epitaphs, and ecclesiastical utensils, ship model offerings brought to Panormitis from far away by the sea, and one of folk art with important objects of the folk culture of the island relevant to fishing, agriculture, and shepherding. There is also a library with Byzantine manuscripts and editions of 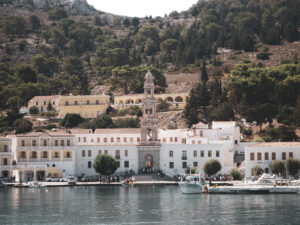 ecclesiastical, historical, and philological content, as well as a gallery with paintings of the landscape of the monastery and its two chapels.

Who is Archangel Michael Panormitis?

Archangel Michael is the Patron Saint and protector of Symi and of sailors. Archangel Michael is known to perform miracles for those who pray for his intercession. The Archangel is famous in the Dodecanese for his righteous nature. If you have made an offering to him and do not fulfill it, he will make it clear through various miracles that he is not pleased – until you complete your promise.

What else you will find here

Elsewhere at Panormitis you will find a little bay, guarded by the beautifully restored windmill on the western headland. The small beach with fine sand is very peaceful. There is also a local bakery, which is always packed with people trying the freshly made Symian pies, biscuits and breads.

9 Best Coffee Table Books that Will Transport You to Greece