Since he took a deep dive into the real estate world in 2003, working as a manager for what was at the time Greece’s biggest online network, Spitogatos.gr, Theodore Syrogiannopoulos changed course for a few years working with a major global business that bought and refurbished incredible homes and spaces worldwide.

Soon after he took the role of Sales Manager at the biggest portal of real estate in Greece before deciding to run his own agency, We Properties. Here he offers IN+SIGHTS GREECE a past-present-future perspective on real estate in Athens, sharing his know-how for the ultimate rental/buying experiences in the Greek capital.

During your almost two decades of working in Greek real estate, what are the major changes that you’ve seen happen?

First were the 2004 Olympic Games. That period the pushed prices up. Then was the announcement of the VAT on new building permits and the madness of the banks that were very generously giving mortgages out. All that came to a screeching halt with the arrival of the Greek financial crisis.

In 2015 things became chaotic, everyone seemed to be involved in real estate. I had a client who was working at a hospital as a nurse and at that time was running 38 properties! Of course, he then quit his job at the hospital. Also, one out of three phone calls for rentals was for Airbnb’s so you can imagine how this demand pushed up the prices.

Within the period of 12 months, in some areas, the prices almost doubled. Koukaki is a good example of this phenomenon. It’s one of my favourite neighbourhoods and was mostly an area filled with students and youths but now it is a big ‘hotel’. And all the students moved to other, more affordable neighbourhoods like Kipseli.

We witnessed some good changes too. Parts of Athens’ centre that was once neglected or abandoned have had new life breathed into them. Buildings that stood empty and neglected for years have now been renovated. Cool new cafes and restaurants, supermarkets and stores have popped up.

To what degree did the Gold Visa phenomenon from foreign buyers shopping Greek real estate impact the market?

It was around 2015 when a lot of foreigner investors flooded to Athens, buying houses and buildings. Most transactions in parts of the city’s centre were actually from foreigners. Some of them through the Golden Visa program and some for investments – lots were from Chinese and some good deals were also made from Israeli investors. In previous years, because of the Greek financial crisis, the market had gone down. New taxation on properties and lots of bad tenants had pressured owners to sell their properties so the prices had tumbled. From there emerged many new opportunities that are still being enjoyed now.

Since the early spring of 2020, lockdown and Covid-affected life have become a global reality… that means spending a lot more time at home. In Athens, what kind of properties are people interested in purchasing right now?

Today, people are looking for bigger houses that are renovated or in great condition. More people want to have a garden, a big veranda or a rooftop as they are 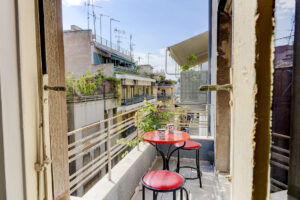 spending more time at home. Also, more people want to find homes with an extra room to be used as an office. Previously, Greeks would famously spend most of their free time outdoors going to restaurants, bars, theatres, and so on, while now with the “new” and “indefinite” situation, buyers and renters need more comforts in the place where they spend most of their day.

Along the same lines, more people are looking to move to areas where there is a park close by, greenery, or seaside suburbs so they can enjoy the scenery when they head outside. 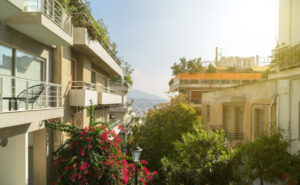 What would be your number one tip for people looking to buy or rent in Athens?

Around the Acropolis and Koukaki areas, you can now find more properties on the market, whereas for several years everything had become an Airbnb. Owners now want to rent their properties out on a long-term basis and a big advantage is that most of them have been renovated in recent years.

I would also advise you to not be afraid to make an offer on a property you have your eye on, even if it’s lower than the asking price. With the right chemistry, you might be surprised to find there may be flexibility available and you can purchase the property of your choice.

10 Things to Do in Naxos