The Cathedral of Agios Andreas (Saint Andrew), the largest church in Greece, is located in the west side of the city centre of Patras. Along with the nearby old church of Saint Andrew, it is a sacred place of pilgrimage for visitors from all over the world, especially on November 30, the Feast Day of Saint Andrew. 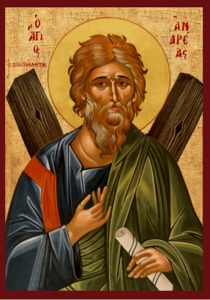 Patras, the modern capital of the Peloponnese and Achaia, is the third largest town in Greece. From Athens, you can get there by car (2.5 hour drive), ferry or bus. There are coach services from Athens KTEL to Patras, which normally take around 4 hours, or a ferry from Piraeus to Patras takes about 3.5 hours.

The first Apostle called by Jesus was Andreas, who had previously been following John the Baptist. Upon encountering Jesus, he became his follower along with his brother Peter. Saint Andreas is renowned for bringing Christianity to Patras, Romania, Ukraine, Scotland and Russia. Agios Andreas is esteemed as an example of humility for the fact that he refused to be crucified on the same type of cross as Christ because he was not worthy. Many countries venerate Andreas as their patron saint including Scotland, Russia, and Romania.

The neo-Byzantine style cathedral is the largest church in Greece and was completed in 1979. The Cathedral of Saint Andrew also has the largest dome in the Balkans. With Byzantine architecture, it has many arches and a bell tower. The church has a length of 60m, width of 52 m and has a capacity of 7,000 people. Over the central dome there is a 5-metre-long, gold-plated cross and over the other domes, there are 12 smaller crosses. These crosses symbolize Jesus and His apostles. The interior of the church is decorated with Byzantine-style wall paintings and mosaics. The Holy icons of Saint Andrew and of Panagia, the “Source of Life”, are to be found at the end of the nave; there is also an impressive carved wooden chandelier.

Opposite this church, there is an older church, also dedicated to Agios Andreas, that was built in 1835 and was designed by the famous architect Lysandros Kaftatzoglou. Right next to it, there is a water spring and it is said that this is where Apostle Andrew left his last breath in 66 A.D.

Relics of Apostle Andreas are found in the church and are displayed at the end of the side aisle in a chased gold casket. They consist of the Saint’s small finger, part of the top of the cranium of the Apostle, and small portions of the cross on which he was martyred. The holy skull of the Apostle was sent there from St. Peter’s Basilica, Rome in September 1964.

20 Best Things to do in Patras

Top 12 Things to Do on Patmos Island