Carolina Doriti, chef, food stylist and food writer extraordinaire, has made a big impact on social media and beyond with her many Greek culinary talents. 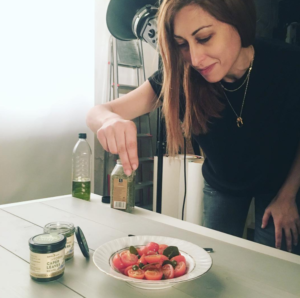 As soon as she could read, Carolina’s mother gave her a recipe book that sent her cooking fantasies rocketing; concepts both simple and complex, profoundly cultural and edgily independent, that have formed her art and presence today. Growing up in Athens in a home where the kitchen was always alive with action, in a family that was directly involved with food, she started writing her own recipes at the age of 12. She studied Media and Cultural Studies and then an MA on Arts Administration Cultural Policy and Curating in the UK, starting her career as a curator at notable museums before returning to her native Athens in 2004.

“I’ve always liked the idea of being strong and independent and dedicated and productive; so I always worked hard! In 2005 I decided to quit my job and turned my hobby into my work. I started cooking professionally, and that’s when my work became my life,” she says. Although she was still in her 20s, she put parties and play aside to dedicate herself to cooking.

In 2013 she gave birth to her son Apollo, which led to a lifestyle change and a new collaboration with Culinary Backstreets, a company that runs gastronomy tours and has a successful web presence showcasing global cuisine. It was then that Carolina started writing about Greek food and gastronomy.

“The more I discovered, the more passion was awakened. I wanted to do the best I could to 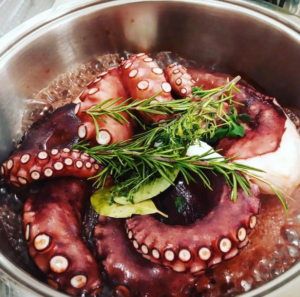 let the world know about Greek food traditions and recipes that were almost lost in time. Also, the products of Greece are such a treasure. I feel so grateful to be in a country that is so “rich” in products, with so much history behind them!” she says.

Her work as a food writer soon led to other avenues. “I started collaborating with magazines by writing recipes, food styling, writing reviews on chefs … an experience that has helped me view this profession from every angle.”

In 2016 Carolina began working for Greek American chef and food writer Diana Kochilas, with whom she collaborates on the show ‘My Greek Table’ as a Culinary producer. This proved to be an invaluable experience: “This gave me the opportunity to travel around Greece and learn so much more. I spent time with shepherds in Epirus, milked goats and tasted raw, fresh milk thistle from the fields, learned how to make different types of 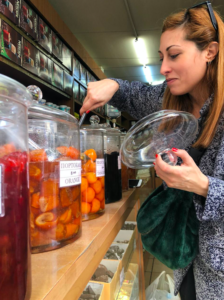 cheese, baked rusks on Cretan mountains, learned from Mrs Margarita making the best tomato fritters in Santorini with the authentic native seeds she’s preserved (now I also own some too), collected honey with beekeepers in Ikaria, learned about Greek wines from some of the best producers, and much more. This made me love Greece even more, I am one of Greece’s biggest honest fans,” Carolina says.

Her experiences were rewarding in her role as a mother too. “The biggest challenge in this work is being a single mom at the same time. When people ask me how I do it I honestly don’t know. But I manage. And I can proudly admit that my seven-year-old Apollo is a real food connoisseur!”

For three years, Carolina has been working on a few projects where she can share her knowledge and experiences that she has gathered throughout the years – the discovery of Greece’s cuisine from multifaceted perspectives. “I love the way they grow vines in Santorini; it’s fascinating to learn about how these vines are not actually water, that they’ve been grown in that shape for centuries to protect them from the microclimate. I love Greek saffron. Greece is so rich in mushrooms that Greeks don’t even know much about. I am also a huge fan of Mastiha and have written a lot about it, having cherished the experience of collecting it. I love a ‘Kariki’ cheese from Tinos – it’s a type of blue cheese that’s not actually blue and matures in a gourd. Above all, I love how from one humble ingredient you can create dozens of creative recipes.”

Carolina keeps herself involved in the food scene in various ways, such as through her collaboration with WISE Greece, an NGO that supports Greek food producers, and recently also started the Culinary Backstreets Athens Wine Club. She is also currently working on writing her own book, while also being near to completing another book she’s been writing with a friend.

One of Carolina’s greatest aspirations is to evoke in those who follow her work “the love, 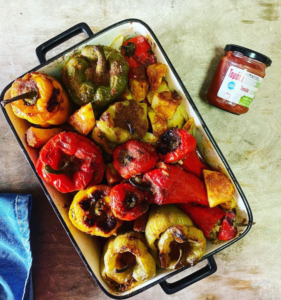 passion, appreciation, and excitement I share for food and cooking, in a simple and humble way. I hope to educate them the way I am trying to educate myself!”

Greeks are slowly but surely discovering more and more about their complex, sophisticated, multiculturally-influenced, and deeply historical culinary heritage, but there is still a way to go, Carolina says. As for how foreigners connect with Greek cuisine, she says “I believe most Greek restaurants abroad fail to represent the real Greek gastronomy. Of course, this has been improving a lot during the recent years but still… there are so many clichés that need to be overcome. Greek cuisine goes far beyond moussaka, souvlaki, Greek salad, and baklava! That’s how for decades this country had been marketing it’s gastronomy, often leaving visitors with the impression that Greek food is greasy and fried and heavy. I mean come on!”

Golf Enthusiasts Head for the Greens in Greece

A Painter and a Writer's Creative Retreat on Lesvos

Connect With Local People, Places and Culture When Visiting Greece