Beautiful hotels are set to open their doors across Greece, including fabulous finds in the country’s capital. Two of the most exciting new places to keep an eye on (as you plan your future travels and start making your reservations in Athens) are located in the city’s former international airport.

According to reports, project developers LAMDA and TEMES S.A. have reached a strategic agreement for the joint development of two hotels and residential complexes on the Athenian Riviera, and the joint investment is estimated to reach € 300 million. This will include a state of the art five-star hotel at the Agios Kosmas marina, as well as a 5-star beachfront hotel along the coastal front. 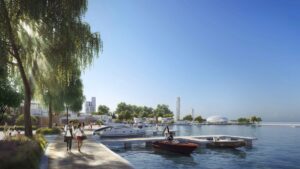 The huge project will also include branded residences, high-end boutiques, restaurants, cafes, bars, and entertainment venues, as well as a casino, marina, business centre and a coastal park.

Chairman of TEME’s Board of Directors Achilleas V. Konstantakapoulos, announced their goal is to contribute towards, alongside other important investments in the area, making the Hellinikon and the Athens Riviera one of Europe’s top destinations.