Many of us dream of having a house on a beautiful island. But maybe it’s not as great – or as easy – as we’d like to imagine.

“Oh, wow, you have a house on an island in the Aegean. That must be wonderful,” you say. “The views, the beaches, seaside tavernas, starry skies . . .  how romantic!”

Well, yes, but be careful what you wish for. Like every rosy image, this one has thorns too.

Remember the old adage, “a boat is a hole in the ocean you pour money into?”It could just as easily apply to a house on an island, especially when you’re able to be there in the summer only.

This year, eight months had passed since we’d closed our house on Andros in mid- 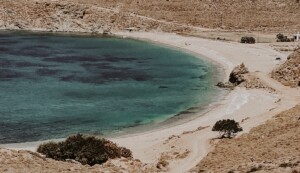 October, thinking to return for the New Year. But foul weather intervened, followed by Covid 19, so we missed our usual March and Easter visits and did not return until mid-June. We’d missed the spring flowers too – the salmon pink gladioli, sapphire blue lupins, mauve mallows poking through the carpet of yellow daisies – and were greeted by an army of waist-high thistles and the giant seed pods of my prize pale violet irises.

Our little house, built on a south-facing slope overlooking a distant beach with the shadowy hulks of other islands on the horizon, has no immediate neighbors and the only sounds we hear from other living creatures are the baaing of sheep and the sawing of cicadas. Luckily, close friends live about a kilometer away and as they had arrived a few days before we intended to leave Athens, we asked C to pass by and have a look round.

“Hi, I’m calling from your house. There’s no electricity and no water in the tanks! [We’re too far from town to be connected to the mains so we pump water from a 30-meter deep borehole.] I’ll see what I can do.”

C is an electrical engineer so after a couple of hours, he was able to restore the electricity and get the pump working. 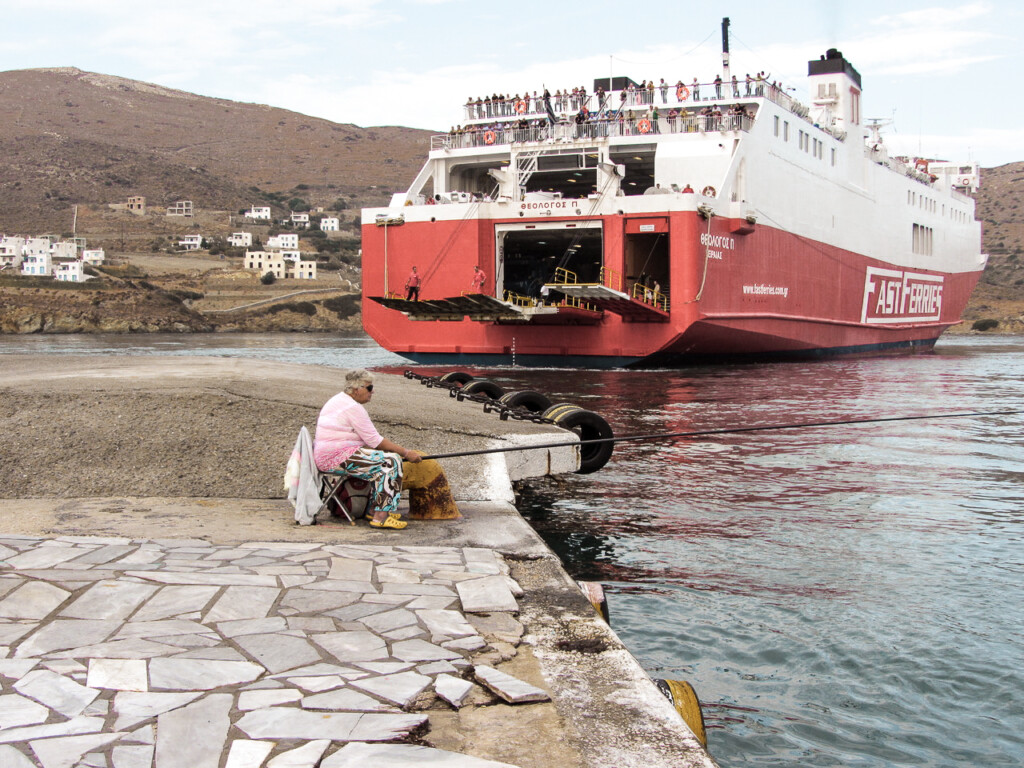 Nevertheless, the moment I switched on the lights that Sunday evening, the fuse

dropped and only the kitchen was illuminated. The next day we discovered the source of the problem: a blackened wall in the room under the terrace, where electrical malfunction had carbonized the plug of a lamp and started a fire that never got going because the room was as wet as a jungle in monsoon season.

Wonderful new life forms had found habitats in the pillows, stone walls, and mattress, as well as inside the old steamer trunk where we stored duvets and things we weren’t using. A small red rug inside had an interesting furry white coating. 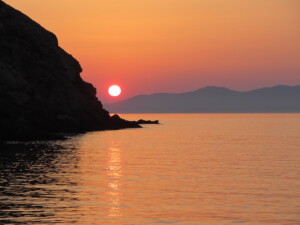 Everything had to be trashed, including the bed, and a local electrician came two days running to change the wiring and fuse box, which involved boring a “window’ between the storeroom and guest room to insert the new larger box.

Then the phone went bust.“We’re upgrading the phones in your area. You’ll have it back soon.” 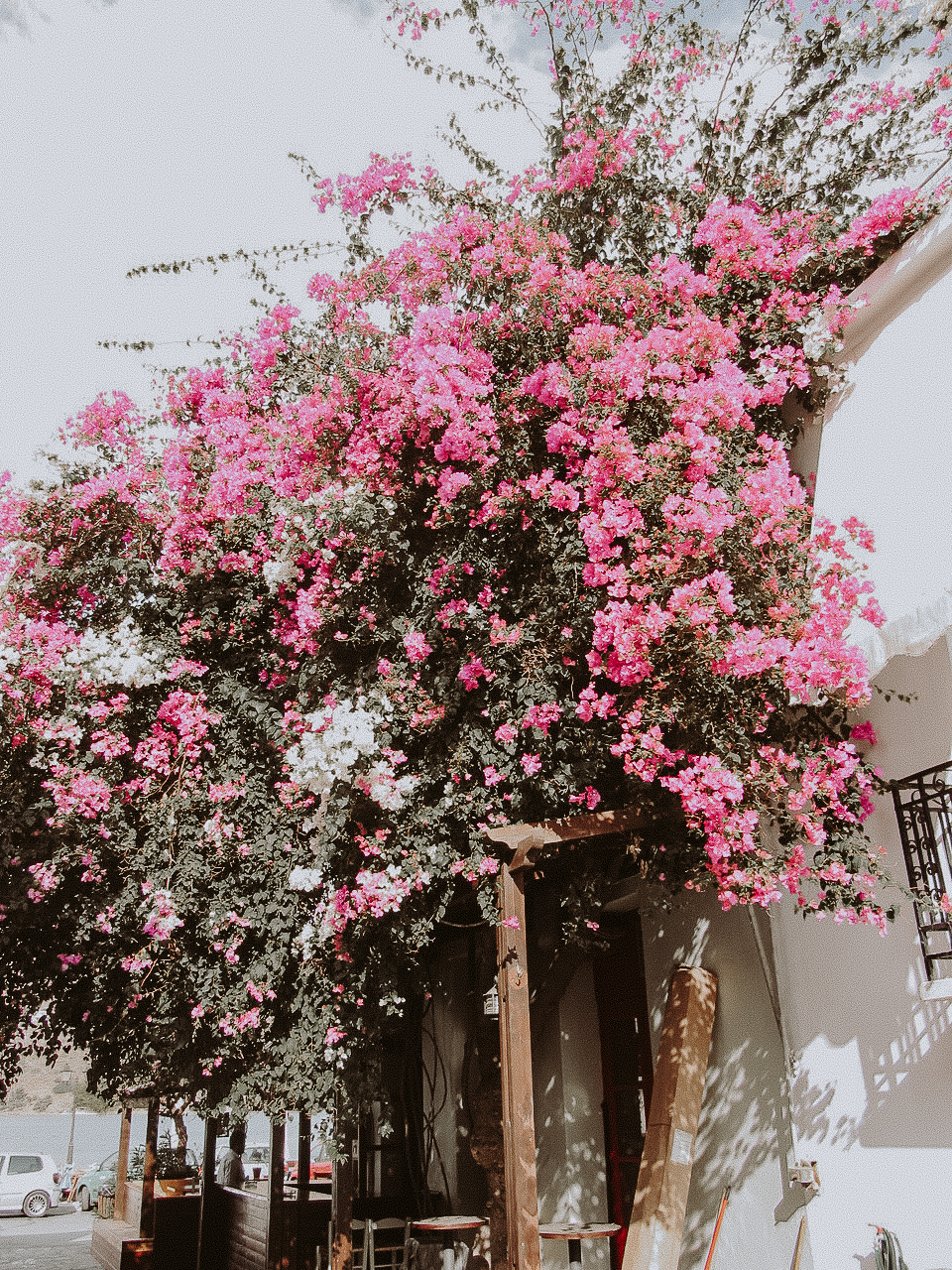 “When is soon? September?” I got no answer but we were lucky, it only took a month. Alas, upgrading simply meant eliminating the snap, crackle, and pop background noise. It is still too primitive to support WiFi.

So, who needs the internet in summer anyway?

But we couldn’t even sit outside because, over the winter, the pergola beams had rotted, and we were condemned to eating lunch in the kitchen instead of luxuriating in the shade on our terrace.

And where was that guy who promised to come clear away the thistles from our thorny acre? My husband, in his 10th decade, valiantly took up the hoe and started making paths so we could check our overgrown olive trees and keep tabs on the overloaded fig trees.

By the third week, exasperated and exhausted, we were ready for a holiday on some 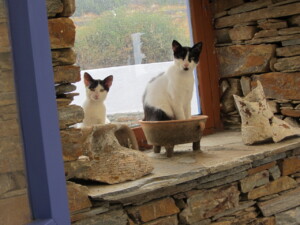 other island. But now six weeks later, the thistles are gone, the pergola is up and covered, the phone is back, and we are once again basking in privilege, happy to spend hours gazing at the olive leaves rippling in the wind, taking daily trips to our gorgeous and isolated beaches, venturing into the port for local fruit, fish, veg and cheese, eating delicious mezedes with friends at those seaside tavernas, and not listening to the news for more than five minutes a day.

So think twice about that island house. Maybe you’d rather rent. They’re not for the faint of heart, though there are multiple rewards. But do make sure you have no phobias about lizards, wasps and spiders, no aversion to begging cats, and that you have a Mr Fixit as a neighbour or house guest.

Get Surfing, Dude: Riding the Waves in Greece

Daytime Drinking in Athens: Might As Well Do it Right