The current variety of surf clubs in Greece is pretty remarkable considering that until the late ‘80s surfing was a relatively unknown sport here. Surfers, windsurfers, and kite-surfers can enjoy their favourite sport along a 14,000 km coastline stretching along the mainland, as well as islands near and far. 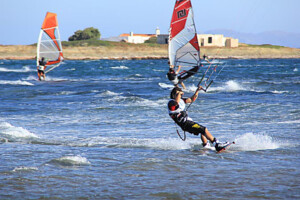 In the southern part of Attica (the Athenian Riviera), head to Yabanaki Beach Park where there is a water-sports centre to enjoy windsurfing, wake-boarding and water-skiing. At the windsurfing academy NOAVV nearby you can rent equip, rent or sign up for lessons if you’re just starting out and have time. Further still is the Kouros Surf School in Anavyssos bay where you can take lessons or rent boards to do your own thing. Kyma Surf School in Varkiza is also a popular and reliable option for taking a few beginners or refresher lessons.

On the northern side of Attica, head to Nissakia Surf Club in Loutsa for windsurfing and kitesurfing, followed by a margarita and a burger. The wind in this area is typically stronger than in the southern areas and is very popular among kite-surfers.

There are plenty of surf-spot options here: Agios Theologos Beach on the southwestern part of Kos is especially known for its great surfing conditions, while in Marmari you’ll find the well-established Surf Club. Cavo Paradiso and Kata beach nearby are also great wind and kite-surfing areas. Also go for Mastichari, Kefalos, Agios Stefanos, Psalidi and Lambi beaches.

This Ioanian Sea beauty has Meltemi (blustery winds) that come and go, but its southern bay of Vassiliki is generally reliable for surfing (the potent thermal 4-6 Beaufort wind here is named Eric). Head to Club Vass for lessons or equipment rentals. Kitesurfers head to Ai Giannis, a long stretch of sandy coastline especially blustery in the afternoon hours.

The Surf Club of Kolymbithres beach in trendy Tinos was actually the first of its kind in the Cyclades and continues to be a hub of surfing and kitesurfing action. Also in the north is Livada, while on the southern part of the island surf or windsurf at Agios Romanos, Agios Fokas, and Agios Ioannis (southeast).

As one of Greece’s most well-known surfing destinations, it’s not surprising that Naxos, the largest of the Cycladic islands, has good options for the sport around the island. On its west coast head to Plaka or Aghios Prokopios where there are several clubs. Windsurfers often stay in the main town as Agios Giorgiosbeach nearby offers great surfing. Kitesurfers head to Mikri Vigla, a wide sandy beach southwest of the island.

Like all its Cycladic neighbours, fashionable Paros is windswept throughout the summer and thus ideal for surfing. Golden Beach and New Golden Beach are the hotspots for surf and kitesurf lovers, as is Pounta, and there are several clubs there for rentals and lessons, while Santa Maria bay is especially idyllic for windsurfing.

Non-touristy Limnos is known for its beautiful beaches and excellent wines but is also a popular surfing paradise. Keros Club on a three kilometre-long beach is great for surfing, windsurfing, and kitesurfing, as well as glamping.

With its stunning Medieval Old Town and picturesque villages, this Dodecanese island is also a hot surfing destination. Prasonisi, on the island’s southern tip, is the most popular spot for experienced wind and kite surfers as it’s known for its strong winds. You’ll find windsurfing clubs renting equipment and offering lessons at Paradisi, Theologos, Ixia, and Lalisos.

Hersonissos and Malia are where the winds are at their strongest. Kitesurfers frequent western Crete, with beaches including Chrissi Akti (Golden Coast) near Chania, Kissamos, Paleochora, Agia Marina, and Falasarna Beach being the most popular.

This southeastern Aegean island is famed for its strong winds so sought after by windsurfers. Keen surfers head straight from the airport to nearby Afiartis, close to the island’s southern tip. Here you’ll find Chicken bay, best for beginners, Gun bay and Devil’s bay.

Exotic-looking Chalikouna (or Issos) is great for beginners as well as advanced surfers, windsurfers, and kitesurfers. Aghios Giorgos is another popular surfing area, as is Gardenos Vitalades on the southern side of the island.

Why My Andros Island House is A Mixed Blessing