As the weather grows chilly, only winter swimmers dare to plunge into the water, but that doesn’t mean we should give up on the fun of aquatic sports. With fantastic rivers around the mainland of Greece, rafting is an adrenaline-pumping activity that often requires little to no experience.

There are numerous professional adventure sports companies that arrange rafting expeditions for individuals or groups and all you need to do is slip into a wet suit and follow a few basic instructions before hopping into a dinghy. Some added bonuses to the fun – being immersed in stunning, rich natural landscapes that include amazing flora and fauna, waterfalls, springs, rock formations and bridges, exploring the surrounding region and making new friends. Here’s a guide to Greece’s best rafting destinations.

This somewhat challenging, 15km (4-5 hours) route starts at Aoos bridge (somewhere in the middle of Palioseli and Vrisohori villages), passing the green gorge and concluding at the picturesque, 20m high Konitsa bridge. Unlike any other river in the country, Aoos flows outside the Greek borders. If you want to enjoy a smaller, easier trip (1.5 hours) along the river you can arrange to raft from the Monastery of Stomio region, or follow an hour’s route that starts from the bridge of Bourazana, passing the ruins of Mesogefyra bridge and ending near the monastery of Molyvdoskepasti.

This river too can be experienced via two different routes (2 hours or 4 hours). One takes you through the narrow gorge of Arachtos past steep rock walls that are 700m high. The route includes a stop at Glyki waterfall with its lovely – and very swimmable – pond. You’ll also pass the beautiful Plaka bridge, which used to be one of the largest of its kind in the Balkans, mountain springs and lush vegetation, and if you’re lucky can do some bird-spotting.

Another great choice for rafting beginners, this 10m route (2 hours) the relatively calm river, which sources from Vardoussia, starts at Poros bridge, passing the beautiful Hani Bania bridge – and the Olympic kayak slalom course – going in a circle and concluding at Hani Bania again.

A slightly more demanding rafting ride, this 8km (2 hours) route is one of the most scenic in Greece. The route starts at Atsicholos takes you through tunnels of trees, white limestone cliffs and a lush, a long narrow gorge, past beautiful arched bridges and natural springs. Trekking Hellas concludes the journey at the spectacular bridge of “Koukos” from where you can hike to a nearby waterfall. According to Greek mythology, Lousios is the river where Zeus had his first bath, while Alfios river, the longest in the Peloponnese, was named after a god.

This generally safe, shallow river is one of Greece’s five largest (234km) and favoured by rafting and canoeing fans. You can choose between the longer route (around 4 hours in total) that starts at Arkoudorema-Nestos and concludes at Paranesti or take the easier route (1,5  hours) that starts at the Platanovrysis Dam and ends at Paranesti.

A great option for beginners and not only, this naturally stunning 10km (2 hours) route starts either at Gavreniti bridge or a little further along at Palia Viniani, with a stop at the lovely Viniani waterfalls and ends at the Megdova bridge.

You can choose between a medium difficulty route and a harder route, in a 2 or 4 hour trip. The trickiest part of this river is between the bridges of Trikomo and Spanos. You’ll raft through lush vegetation and past splendid 16th and 17th century stone bridges. Some excursions take you past a double arched bridge that was once part of the railway and the three arched bridge of Aziz Aga, the largest of its kind in  Macedonia. 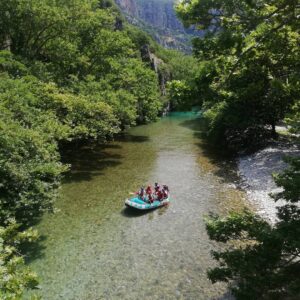 A 5km (1.5 hours) route in the heart of the Vikos – Aoos National Park, Voidomatis is considered one of the easiest to raft along, making it ideal for younger people and beginners. Starting from the beautiful Aristi stone bridge and ending at Kleidonia Bridge, you’ll get to enjoy some of the clearest and cleanest river waters in Europe.