By today, paximadi rusks are produced and enjoyed throughout the country and come in many sizes, shapes (and prices) and with varying flavourings. It’s now even used in powdered form to flavour dishes at gourmet restaurants. Basically, the humble paximadi, with its millennia-long history, has come a long way!

The paximadi was once a daily staple food for farmers, seamen and labourers, whose wives baked 2-3 days-old stale bread to harden and preserve it. In older times it represented both hardship and the solution to hardship and was used in trade deals alongside coins and preserved meat during the Venetian occupation periods in Greece because of its durability and sustenance.

In Crete, the dakos rusk is traditionally made with barley or wheat and used as the base of the by now famous dakos salad, served at almost every modern Greek taverna. The large, rock-hard Cretan dakos are briefly soaked in water to soften before being topped with tomatoes, goat’s cheese, sliced onions and a healthy dollop of rich extra virgin olive oil.

For decades, barley rusks are widely produced in Mykonos, Kythnos, Paros and other islands. In Santorini and Anafi they are sometimes flavoured with saffron, while in Kalymnos the round rusks called mirmizeli are flavoured with anise and cumin. In Kythera they are rich in olive oil and in Lefkada they’re more slender slices and flavoured with fennel seeds, clove and cumin. 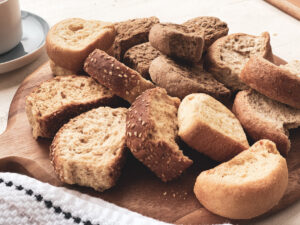 Why it’s better than bread

Regardless of what type you use, Paximadi adds a crunchy, grounding texture and flavour to all kinds of dishes – as crouton-style bites in salads, soups, stews or ladera dishes; as a base for scooping up dips like taramosalata and melitzanosalata; as a base for toppings like soft cheeses, olive paste, chutneys and more. The added bonus is that it offers plenty of health benefits too.

It’s safe to say that the darker and denser the rusk appears, the higher it will be in nutritive value. White-flour rusks may be made with olive oil or no salt, but will still be lower in fibre, which is one of the paximadis’ greatest attributes. Generally aim for the 100% barley or whole-wheat and /or carob rusks if you want to reap the most health benefits, which include the following: B vitamins (especially B1 and B6), folic acid, iron, magnesium and high fibre. Carob rusks also contain vitamins A, C and D.

What’s in a name?

Known as “dipiritis artos” – or twice-baked bread, rusks have been a staple part of the Greek diet since ancient times. Meanwhile its current name ‘paximadi’ is said to come from the name of a gastronomy expert and writer, Paxamos, who lived in Rome. In his book Siren Feasts Andrew Dalby writes that the work paximadi was later morphed into the Arabic bashmat or basquimat, Turkish beksemad, Serb-Croatian peksimet, Romanian pesmet and Venetian pasimata.

My favourite rusk by far: To Paximadi Tis Katohis. For hard-core paximadi-lovers, this highly nutritive, organic rusk’s name ‘the rusk of the occupation’ says it all. It contains 70%, barley flour, carob flour, oat flour, sourdough and olive oil. 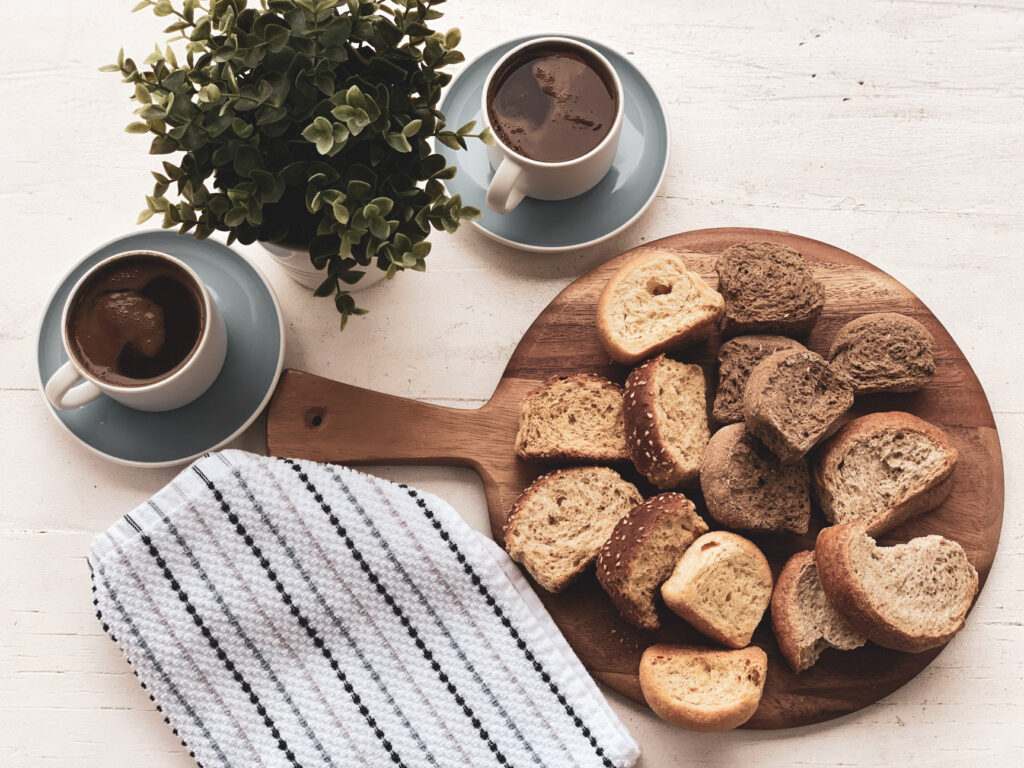 Connect With Local People, Places and Culture When Visiting Greece