Philhellene photographer Mark Wilman, creator of a successful six-year project and book ‘Discovering The Beauty of the Cyclades’ describes his first trip on the island of Poliegos.

Mark’s project has been presented by the British Embassy in Greece, the Greek Embassies in Rome and Tel Aviv and the Aquarium of Milan. His evocative photography and writing transport you to the heart of the Cycladic culture, landscapes and colours. And if you want to experience it for yourself, he is available to offer photographic tours. Here he writes about his first encounter with Poliegos. This personal story about Poliegos island is the sixth part of a narrative series created by him especially for Insights Greece.

Discovering the Beauty of Poliegos

Oh, Poliegos. Thou art more lovely … Thoughts of Shakespeare’s Sonnet 18 come to mind when I contemplate how to speak of Poliegos.

I discovered the island on a trip in my inflatable across a coastal village in the north-east of Milos many years ago. Having free-dived the islets of Agios Efstathios and Agios Georgios in the area it also shares with Kimolos, I felt a natural curiosity to explore. 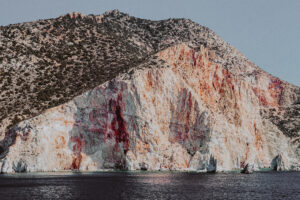 On the western coastline that morning, the sea a depth of a blue unusual outside the Mediterranean, I first reached Manolis Islet, its protective form sheltering, at least partially, the three beaches inside Espano Mersini Bay. Southwards along Cape Pounda, until the bay of Kato Mersini, all was fine.

Poliegos was charming, its verdant, convex hillsides extending up mountains with intricate geometrical shapes, their soil and rock a mix of red, orange, yellow and brown. But from Cape Zios, the scenery changed quite dramatically, and by Skala Grigoriou, with its mining track just a few metres above water extending to a docking point directly over a patch of emerald-turquoise perfection, I thought I was hallucinating.

Upon reaching Kalogiros rock I could take no more, so magnificent was it all. Really, I’d 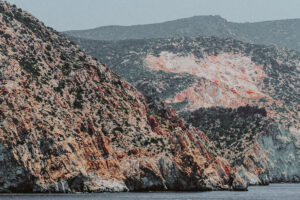 never seen anything like it. Rocks shaped like pyramids metres-high and rising out of water so azure it put the sky to shame.

A beach hidden in isolation, three metres in length, one metre in width, was covered by the finest white sand and had as its backdrop a wall of differing colours, extending sharply upwards at least a hundred metres, the sea in front of it like a lake. Not a soul in sight.

I moored the boat and prepared to dive, the first of many memorable immersions around the island over several years, often concluding after sunset when there’s still a lot of water to cross to get back to Pollonia.

The Pyrgi Channel between Poliegos and Kimolos frequently intensifies waves, causing me stress as I’m forced to take them on the starboard side, with a probability of capsizing. The only successful way to manoeuvre is to position the bow partially into the oncoming force, ride over it as if it’s a hurdle, only to confront the next within moments.

With hundreds of waves none ever the same but each ready to provoke a serious mistake, it was usually a miracle to be back on dry land.

Inspiring People Around the World to Cook Greek