Every year thousands of pilgrims from around the world arrive at Kefalonia for a blessing at the Monastery of Agios Gerasimos.

Last year, I was fortunate enough to visit this spiritual and sacred site again, which is home to a 16th-century church complex with a modern chapel, courtyard, gardens, and most importantly the tomb and relics of the Holy Saint, who once lived here, and is known to perform miracles upon those who pray for his intercession.

The monastery is located 15km from Argostoli and is found on the plateau of Omalon, near the villages of Valsamata and Fragata. The easiest way to get here is by car, however, during peak season, there are buses that arrive daily from the main town.

Who was Agios Gerasimos?

Agios Gerasimos is the Patron Saint of Kefalonia and known for his protecting and healing powers, especially for those with mental illness. Born in 1503 in Trikala, he was ordained a monk at Mount Athos, then went to Jerusalem where he lived for 12 years, before passing through Crete and Zakynthos and finally arriving in Kefalonia where he died on August 15 in 1579. Agios Gerasimos spent his first five years in a cave in the area of Lassi. He subsequently cultivated the area where the monastery of Agios Gerasimos now exists. The monastery which he established cared for the poor and became a charity centre. 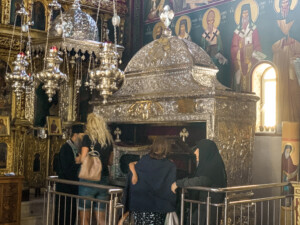 What can be seen at the Monastery today

The body of Agios Gerasimos is at the monastery and made available for veneration as miraculously, it has never decomposed. After his death, he was buried twice and exhumed intact, thus leading the church to ordain him as a Saint in 1622. Today, his relics are saved in a double glass reliquary placed above the Saint’s tomb, which is dressed in burial robes and displayed for worship. I was lucky enough to have been there at a certain time when the casket was opened by the nun and high priest on duty, who was saying a prayer. There is a book inside the church where you are able to write the names of family and friends who you wish to receive Agios Gerasimos’ blessing. You are also able to give the priest a piece of paper with names to be read out loud, while the casket is open.

At the back of the church is a trap door that leads down a narrow passage to two small caves where Agios Gerasimos lived before the monastery was built. Visitors can climb down a three-metre ladder to see the caves that were built by the saint himself. After reaching the first cave, you can visit a second smaller one with a tiny entrance.

The modern church next door

Next to the small chapel is a much larger modern church, richly decorated with ancient icons. Ceiling murals depict scenes from the Old Testament, the birth and baptism of Christ and the Annunciation, the Last Supper, the Crucifixion, and the Miracle of Pentecost. It includes a fresco of the death of Agios Gerasimos depicted with Christ near his deathbed holding his hand over the Saint’s soul depicted as a child in swaddling clothes.

In the main monastery courtyard, you will see a big plane tree and a well. The tree is said to have been planted and the well dug with the saint’s own hands. The area is well known for its wells and visitors to the monastery may pass through the garden containing 40 of them.

When can I visit?

Visits to the monastery can be made every day between 8 am to 1 pm and 3.30 pm to 9 pm. Make sure to be appropriately dressed, otherwise, there are apron-like dresses that you can wear, as women’s knees and shoulders must be covered at all times while you are inside the church. 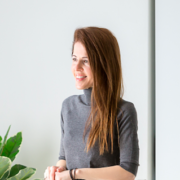 Daytime Drinking in Athens: Might As Well Do it Right

Visiting the Miraculous Monastery of Panagia Tsambika in Rhodes