Having been gifted a piece of land on the unfamiliar Ionian island of Kalamos, two newlyweds quickly headed over to discover their patch of paradise, with some surprising results.

When I got married in July 2008, I did two things I never thought I’d do: one, finally, get married, and two, go camping for a second time. This time on my honeymoon. I should have seen it coming when my groom-to-be proposed to me on my first (and I swore, last) experiment with camping in Crete. He asked me to marry him as I woke up blinded by a mercilessly piercing ray of sunlight; stiff after a freezing night, and sweatily desperate to jump into the twinkling waters in front of our tent. Sometimes things come in pairs.

As a wedding gift from my husband’s parents, we were given a four stremmata piece of land on the tiny, mountainous southern Ionian island of Kalamos, a place I’d never heard of. Located across Lefkada and Mitikas harbour and beloved to sailors who consider it their ‘secret’ docking-and-diving cove, the land is heavily forested with tall pine trees. Part of our land includes a beautiful pebble beach with yes, actual “crystalline waters”, as well as the sad remnants of the beautiful Byzantine church of Episkopi, built in 1648.

Travelling Off into the Sunset

As you may have gathered by now, I am not fond of camping, despite being a true nature-lover. But we had struck a golden deal for our 20-day honeymoon and, knowing that marriage is meaningless if not about (smart) compromises, I agreed to spend the first 10 days camping on our land. The other 10 were spent in Rome, where I was born and grew up and yearned to return to enjoy its classical romance; and it didn’t hurt that it would be during the July sales.

We arrived at the idyllic glow-time hour on Kyr Manolis’ fishing boat, which was our 10-minute sea taxi ride to Mitikas and back throughout our stay. Apart from the one time we took the ‘pandofla’, a large open carrier-boat that transports everything from horses and cattle.

You Are Not Alone 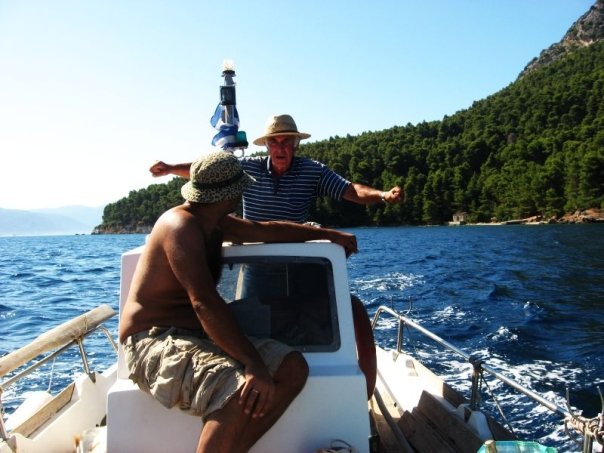 As the excited newlyweds that we were, we flung our belongings onto the square concrete marina and plunged into the sea to swim into the vanishing sunset. Still filmed in grungy urbanity, we rejoiced at the magnificent nature that embraced us and the feeling of cool, clean, buoyant water that held us up. We were overcome by the tantalising feeling one gets in the Greek sea, of desiring to swim deeper and deeper into its elusive heart and swIm far from the land. It was paradisal; until I felt something warm, hard and furry bumping into my thigh. Astounded, I let out a sharp – ok, perhaps exaggeratedly prolonged – shriek and raced back to shore.

We set up our tent on a raised, sea-facing part of the forest and opened a bottle of wine, so I relaxed and decided to forget The Incident In The Sea, putting it down to some weird facet of my wild imagination. But several days later, as we dined in Mitikas, we shared our story with the restaurant owner and were told that we were staying in an area populated by dolphins and seals. Suddenly, this made our current home seem even more magnificent, and I realised that it must have been a cute, fuzzy seal that had scared the living daylights out of me. 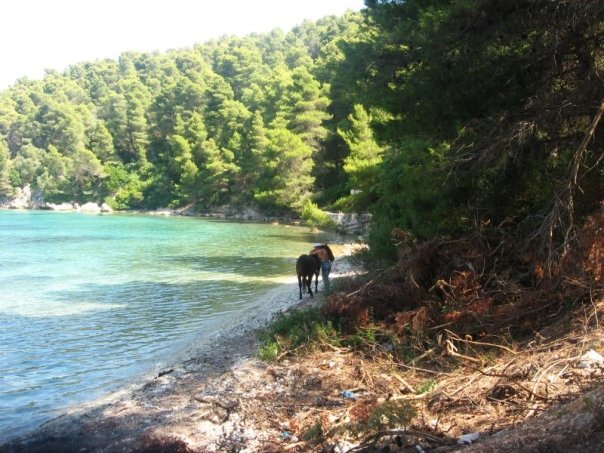 Ten days is not a short time for a non-camper to go camping. Yet, as do so many superb places in Greece, it silently and gently enchanted me into slowing down and fluently merging with its pure, unrestricted energy, feeling like I was in my forever home.

Upon waking we would head straight down to the beach, with nostrils-full of pungent wild herbs like thyme, sage and oregano that we crushed underfoot as we rushed to plunge into the sea. Our only visitors were goats, who politely enough pre-announced their arrival with the bells around their neck.

In the high afternoon, we were lulled by the hypnotic song of the cicadas blended with the sound of lapping waves, enjoying siestas in the tent, or crouched reading in a tiny patch of shadow created by a rock.

At night we sometimes returned to civilization on Mitikas or, rarely, to the inhabited parts of the island where there are small, pretty villages like Pefkoi, Kefali, Agriapidia, Kedros, Alexaki, Kipoi and Trachilos. This also required taking a ‘taxi’, which was a dusty, bumpy pick-up truck that we stood clutching the sides as we breathed in the cool, green, dusty humidity of the night.

Our Version of Blue Lagoon 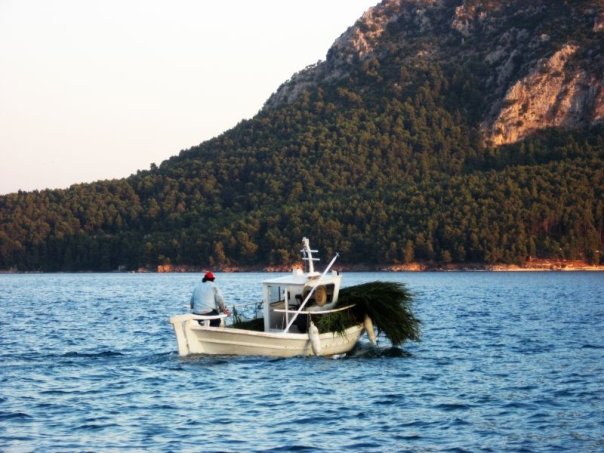 The best nights were when we stayed on our beach. My husband enjoyed emerging from the sea with a bag of sea urchins, one of our favourite foods in the world, and I, as a Romana, would cook up spaghetti in a small pot filled with seawater on the tiny ‘gazaki’ we’d brought along. Once combined, and seasoned with olive oil, lemon and salt, this was literally a five-star dinner under the unending galaxy of light overhead. After dinner, we’d sometimes clamber into our inflatable dinghy and row around in the moonlight watching the ferries, caiques and once even dolphins skim the water’s surface.

When chocolate-brown and salt-bitten, dreamy-eyed, and profoundly relaxed we headed back to Lefkada, I knew I would be coming back soon. I haven’t been back since, and that was 12 years ago. Within those years we considered creating a retreat centre there, or building a yurt; or selling it. Either way, the land and sea and all the glorious life within it live on in with righteous candour and regularly bring joy to all who visit. Hopefully one day soon that will be me again too.

All images by Alexia Amvrazi © (Copyright)

Masterful Artist George Rorris Brings Us Closer to Our Own Humanity

Buying Property in Greece: Do the Groundwork and Enjoy the View