The Holy Monastery of Agios Nikolaos is the first active Monastery you encounter on your way to Meteora and was founded at the end of the 14th century.

Meteora is from the biggest and most important group of monasteries in Greece after those in Mount Athos. Researchers have located the first traces of their history from 11th Century, when the first hermits settled there. The rock monasteries have been characterised by Unesco as a unique phenomenon of cultural heritage.

Founded in the 1300s, this monastery boasts a beautiful main church that has been decorated in a stunning tradition. The main church is dedicated to St. Nikolaos and was built in 1500.

Since the top of this rock is limited in size, the monastery buildings had to be extended upward instead of outward, rising three stories high. The small katholikon of St. Nicholas occupies the second floor. Its dome has no windows because of the floor built on top of it and it has an irregular floor plan in order to fit on the rock. A larger narthex extends to the west.

The first floor of the monastery is occupied by the tiny Chapel of Saint Anthony, which contains some early 14th-century frescoes, and a crypt where relics and manuscripts used to be stored.

The third floor contains the old refectory, decorated with frescoes and recently renovated for use as a reception hall, the ossuary (for storage of bones), and the renovated Chapel of Saint John the Baptist.

The artwork of Agios Nikolaos are some of the most important in Meteora, as the frescoes inside the church have been credited to the celebrated leader of the Cretan school, Theophanes Strelitzas. He painted them in 1527, when it’s said he was a monk here. These frescoes are the first to bear the signature of the artist (“Ch.M.”) and are among his earliest works of this magnitude. If you wander to the upper floors of the monastery, make it a point to admire the chapel of St. Anthony, here you’ll discover a number of 14th Century frescoes and murals that are iconic in Byzantine art- depicting such scenes as the Passion of Christ, the Virgin Mary praying, Jonah and the Whale, the Liturgy of Angels and the Last Judgement. The frescoes demonstrate the characteristics for which Theophanes of Crete became famous: delicacy of line; vividness in imagery; and bright colors. Also ask to visit the ossuary which is an important part of the monastery’s attractions.

The limited surface of the rock forced the builders of the monastery to build it vertically on floors, one level on top of the other. Access to all the different floors is achieved through an inbuilt staircase. At the entrance of the Monastery lies the Church of St. Anthony and the crypt where the codes and the monastery’s heirlooms were previously stored.

Who is Agios Nikolaos

Agios Nikolaos was of Greek descent from the maritime city of Myra in Asia Minor. He is revered and commemorated amongst Orthodox, Anglican, Catholic, and Lutheran Christians and is also known as Nikolaos the Wonderworker- as he performed miracles to those with illnesses, helped the poor and released the three commanders. He is also the Patron Saint of travellers, sailors and the sea, as many of his miracles are related to the sea. Agios Nikolaos is one of the most well- known and most-loved Saints of all time and his Feast Day is December 6. 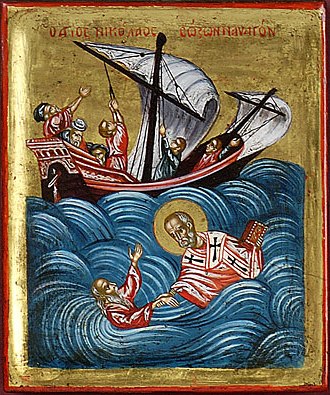 Dreaming of a Bright Christmas in Athens