Without a doubt, the majestic capital of Syros and the prefecture of the Cyclades will fascinate you. From the moment the ferry approaches the port of Ermoupoli, you will sense the incomparable beauty.

If Ermoupoli was a woman, she would be an aristocratic one at that, modern and at the same time traditional, with the charm of a past era. Some days you will see her walking in all her beauty and in a classy manner; dressed in a long gown, carrying an umbrella to protect her pretty skin from the sun. You will discover aspects that reveal her delicate elegance, her sweet romance, and her gentle origins. Other days she will inspire you with her independence, strength, and will for life and adventure. Then you will catch her smiling at the countless flashing lights from the decks of the ships like a movie star. The lady of Ermoupoli begins her day with a 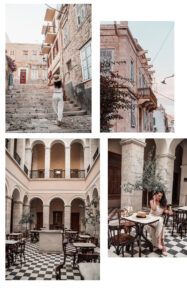 coffee at Ermou street, then swims in vast green-blue waters at Asteria beach, tastes traditional flavours during a late lunch before wandering the small charming streets like a young child in a candy store. And when the sun is preparing to dive into the sea, she slowly rides her bicycle along the pretty promenade, where everything looks beautiful and few things stand out; the stunning architecture, the warm sun, and the magic of the sea.

In the afternoon you would find her devouring loukoumia (Greek sweets) at the square, under the imposing building of the Town Hall. Then she tests her luck at the casino. She would also be a culture lover and find joy in the theatre, museums, painting, and photography exhibitions. She would read Roidis and Manos Eleftheriou and she would listen to Markos Vamvakaris. After all, he wrote a song for her, the famous “Frankosyriani” with the Greek lyrics “Mia fountosi, mia floga echo mesa stin kardia. Les kai magia mou cheis kanei fragkosyriani glykia” – “I have a flush, a flame in my heart. As if you did magic on me, sweet Frankosyriani.” (Catholic girl from Syros).

The city of Ermoupoli is the lush fruit of the hard labor of local refugees who came to the island after the Revolution of 1821 from Chios, Psara, Kassos, Kydonia, and Smyrna. Syros was another “land of promise” for them because the war had not touched the island as it 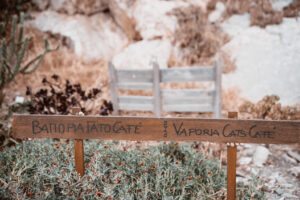 was under the protection of France. Ermoupoli means “The City of Hermes”, the God of commerce and in fact, it was the primary port of Greece. During these years the population reached 14,000 and Ermoupoli had one of the first post offices in Greece, a hospital, an opera house, the oldest high school in Greece and a private school for art and culture, a municipal orchestra, the historical Neorion Shipyards, an orphanage, a sanitarium and much more. But above all, it had the most amazing 19th-century architecture, very different from the rest of the Cycladic islands. In other words, “Greece was reborn in Syros,” as late politician Eleftherios Venizelos once said.

The first landmark you should definitely visit is the majestic Syros City Hall, designed by famous 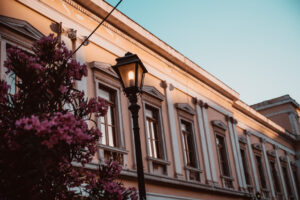 German architect Ernst Ziller, the most impressive Town Hall of all Greece. Its inviting design draws architecturally on three different styles: Tuscan, Ionic, and Corinthian. It dominates the historic Miaoulis square, one of the largest marble-covered squares in Greece, since 1898. The Town Hall now houses the courts, the land registry, the archaeological museum, and other various public bodies and municipal services.

Another significant attraction of the city is the Apollo Theatre, an extraordinary building of 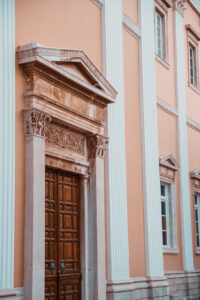 1864 that is said to be a miniature of the Milan Scala but in reality, it’s the colour that connects the two theatres. The Apollo Theater first opened its doors with an Italian theater troupe, which among other performances staged the famous Italian opera La Traviata. Apollo’s stage has hosted great operas and operettas, and also holds local amateur theatrical plays, cultural events, and the annual ‘Ermoupolia’ summer festival.

Protomagia, Welcoming the Month of May