Philhellene photographer Mark Wilman, creator of a successful six-year project and book ‘Discovering The Beauty of the Cyclades’ describes his first encounter with Kythnos.

Mark’s project has been presented by the British Embassy in Greece, the Greek Embassies in Rome and Tel Aviv and the Aquarium of Milan. His evocative photography and writing transport you to the heart of the Cycladic culture, landscapes and colours. And if you want to experience it for yourself, he is available to offer photographic tours. As a child, the Londoner with Caribbean blood went to Kythnos as one of his first Cycladic island experiences, described here. This personal story about Kythnos is the next in a narrative series created by him especially for IN+SIGHTS GREECE that will run over the next few weeks. 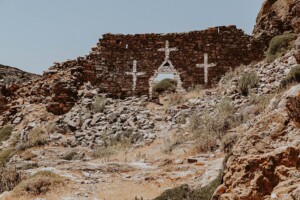 Discovering the Beauty of Kythnos

The pleasurable but potent scent of yellow Phlomis Fruticosa, or Jerusalem Sage, on the path from port Merichas up to the main road, (which at a height of 200m bisects the island from this point all the way down to Agios Dimitrios), contrasts decisively with the pungent odour of Humulus Lupulus, or hops, a ubiquitous crop of prime importance to Kythnos.

The June sea, electric blue this late spring, forms an ever-larger segment of panorama behind the steepening incline. Massive spiders’ webs are an eyesight test the whole way along. Piperi Islet comes into view, as does the Spartan north of Serifos, the path now a track, setting the downward pace at a speed less than comfortable, feet moving almost beyond control. 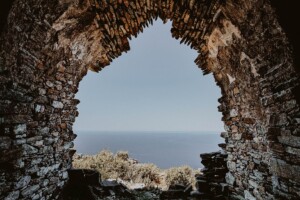 Agios Nikolaos church in the far corner of Skylou Beach is perfectly white though un-Cycladic, with its smart terracotta roofing, the water gushing at its facade fresher than cool.

Orias Castle, past the secluded seaside village of Loutra, with its bold historical personality, is reached over scenery that heads high into the north-western corner. Perched well above Gialoudi and Sklavos Bays, it served as the isolated capital until 1617. Legend has it that it was overrun after a young woman heavy with child approached the entrance begging to be admitted; the watchman’s daughter opened the gate for her and at the same time – unwittingly – also for the foreign aggressors hiding nearby. 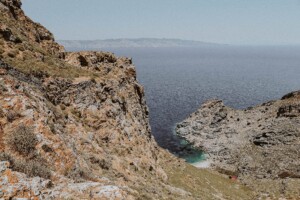 Exploring the castle on its acutely slanting exterior offers insights into the inhabitants’ lives, the island of Kea directly in front of their homes last inhabited long ago. There’s a feeling that voices and echoes remain trapped in the wall’s corners, eager to tell their tales, whisper their fears, if only they had the chance. This castle was a place of drama easily felt.

Why Extra Virgin Olive Oil is the Healthiest Oil Worldwide