The Corinth Canal, which separates the Peloponnese from mainland Greece, is one of the oldest and most striking manmade canals in the world; not to mention a very important navigational route that connects the Corinthian Gulf with the Saronic Gulf. 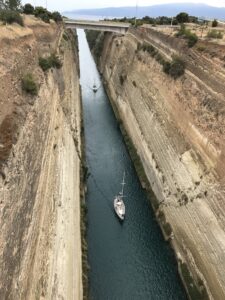 ancient times that linked the Ionian and Aegean seas. The canal’s position in fact separates the peninsula of the Peloponnese – converting it into an island – from the Greek mainland. And, while the famous canal is quite narrow, it’s a vital lifeline for ships wanting to enter the Aegean Sea.

History of the Corinth Canal

Named after the Greek city of Corinth, the Canal has steep limestone walls that soar about 300 feet from the water level to the top of the Canal but is only 70 feet wide at sea level. Ships must be narrower than 58 feet wide to transit the Canal. This small size was appropriate when the Canal was built in the late 19th century, but it is way too small for today’s cargo and passenger ships.

Facts About the Corinth Canal

Spanning a distance of 6.3 kilometres, the canal helps ships save a journey of 185 nautical miles. Before the construction of the canal, ships passing through this 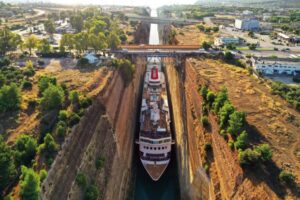 area had to endure a circuitous and a roundabout route in order to enter even the Mediterranean and the Black Seas in addition to the Aegean Sea.

Construction of the Corinth Canal

After centuries of attempts to create the canal, the Roman Emperor Nero made the first effort in 67 AD but the canal was actually completed by French engineers in 1893. The first documented ruler to propose a canal was Periander in the 7th century BC. He eventually abandoned the canal plan but built a portage road, named the Diolkos or stone carriageway. This road had ramps on either end and boats were pulled from one side of the isthmus to the other. The remains of the Diolkos can still be seen today next to the Canal. 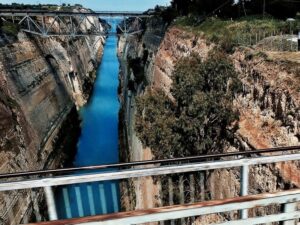 If you have your own car you can cross the bridge on the way to Corinth from Athens, take the exit with a sign that says “Tourist Exit” and drive over the canal to the other side. Visitors can stop and park next to the Isthmia ‘sinking’ bridge on the old National Highway, which links the Peloponnese with Athens. There are a couple of taverns close by, where you can sit and enjoy a coffee or late lunch. From here you will see the bridge submerging under the water, and then reappearing again once the vessel has sailed by.

This dramatic gorge is one of Corinth’s most visited spots and if you’re after an adrenalin rush, you can even bungee jump down it. The canal mostly sees the presence of small vessels, cruise ships, and yachts, as it has become one of the major tourist destinations in the country, enabling visitors to take short trips through the canal. In today’s world of 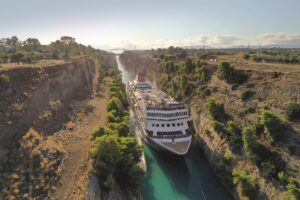 Cruising Through the Corinth Canal

Greece Confirms it Will Be Open to Travellers for Summer 2021