Known as the “neighbourhood of the Gods” Plaka, built in the shadow of the Acropolis, is the most authentic sample of old Athens, mixed with the new romantic one. 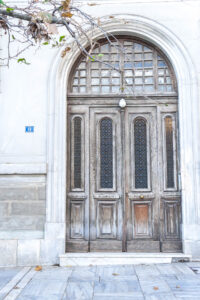 This neighbourhood has been continuously inhabited since antiquity, so it’s a combination of the Ancient Greek, Roman, and Ottoman empires. Neoclassical buildings, car-free alleyways, charming cafés, small gardens with bougainvillea and street art are a few reasons why this neighbourhood is our favourite in Athens, and one we believe needs to be experienced at least once in a lifetime.

How to get there?

From Syntagma Metro station you can take Voulis street straight ahead until Kydathinaion street. From Monastiraki Station, walk Adrianou street from the flea market. Alternatively, from Acropolis station, you can cross Dionisiou Aeropagitou then enter at Vyronos Street.

For Brunch or Lunch

Bakaliarakia tou Damigou – A family-run fish taverna, opened in 1864. It is situated in the basement beneath Brettos Bar. Don’t miss the battered cod with garlic sauce (Kydathineon 41)

I Palia Taverna tou Psarra – The oldest restaurant of Plaka, first opened in 1898. Famous for its fresh fish. Try the spaghetti with seafood and loukoumades (Erotokritou & Erechtheos 16)

To Kafeneio – Housed in a 400-year-old building, that from time to time was the residence of many famous Greeks, they serve traditional but creative Greek dishes (Epicharmou 1)

Yiasemi, a picturesque place that is the most Instagrammable bistro-café in the neighbourhood, with tables outside on the staircase. You can just sit and relax, watching people go by (Mnisikleous 23)

Kimolia Art Café, a backstreet, colourful and unique café, hidden in the alleyways of Plaka (Ypereidou 5)

Anafiotika Café, stands out for its position, on the famous steps. Ideal for a coffee during a morning stroll or a Greek meze later on in the day (Mnisikleous 24)

Café Plaka, for its fireplace during winter and its calming roof terrace for the sunny mornings. Taste the pancakes and take photos in front of the pink house (Tripodon 1)

Dioskouroi, a favourite student hangout and not only! (Dioskouron 13)

Souvlaki O Kostas – The best souvlaki of Athens. For almost 6 decades it remains untouched by the modern attempts of Greek souvlaki stores. It used to be at Adrianou 116 in Plaka since 1950 but in the last years it was transferred a few streets further down (Pentelis 5)

Brettos Athens’ oldest distillery- established in 1909 by Michail Brettos, it’s almost impossible to pass by and not pay attention to the illuminated bottles displayed behind the bar, filling the walls up to the ceiling. Specialising in colourful cocktails. (Kydathineon 41)

Insider Tips- Something you may not know about Plaka is that during the 60’s it used to be the place for traditional boîtes, small live music venues, like cabarets, inspired by the French Nouvelle Vague cinema movement. Today most of them are closed (like the legendary boîte Esperides) but you can still find a few, like Apanemia and Vatraxoi. For traditional Greek live music, you can also visit the Perivoli tou Ouranou, one of the oldest venues for laika in Athens.

For Some Fine Dining…

Daphne’s Restaurant – One of the most famous Athenian restaurants with Greek and Mediterranean cuisine, a hot spot for politicians, artists, and celebrities. (Lisikratous 4)

Forget me Not – Souvenirs from contemporary Greek designers, including gifts, stationery, home accessories, clothing, and books as well. (Adrianou 100)

Ioanna Kourbela – One of the most celebrated contemporary Greek designers. The Kourbela family workshop opened in Plaka in 1971, offering handmade knitwear. (Adrianou 109)

Elaias Gi – At this shop, you can find a big selection of good quality olive oil and tree-based products, like soaps and kitchenware (Adrianou 122). Same at Evonon (Adrianou 124)

Athens Protasis, for handmade products, designed and manufactured in Greece by taking raw materials from around the world. (Adrianou 136)

Martinos Antiques – Since 1895, it is as much a museum as a shop. It boasts an impressive range of furniture, decorative items, Islamic art, fine art, and jewellery. (Pandrosou 50)

Elliniko Spiti – Dimitris Koutelieris makes in his workshop furniture and art of dismantled ships, houses, and other recycled materials. (Kekropos 14)

DotAhart is a special art lab, where you can apply your imagination to create your own ceramic inspired by Athens. A special place to buy handmade gifts as well. (Afroditis 12)

Ragava Park or “Eleokipos” (Olive Garden), a tiny park, where you can find the steps that lead to Stratonos street, the gate to Anafiotika neighbourhood.

The charming Lysikrates Square with the view of the Acropolis and the imposing Choragic Monument of Lysikrates.

The Museum of Greek Folk Musical Instruments opened in 1991, it’s constituted by the collection of musicologist Foivos Anogiannakis.

The Jewish Museum, with a collection of rare books, textiles, domestic and religious artifacts.

The Athens University Museum, with many transcripts and old photos,

The Museum of Pavlos and Alexandra Kanellopoulou, with archaeological finds and artworks from the prehistoric period up until nowadays

The Benizelos Mansion, the oldest house in Athens which has been transformed into a museum.

The Children’s Museum, with art created by children.

Plus, the Roman Agora, built between 19-11 BC as an expansion of the ancient Agora to the East, from donations of Julius Caesar and Augustus.

The Fethiye Mosque, the Agoranomion and the Tower of the Winds, a 12-meter-tall clocktower designed by the astronomer Andronikos of Cyrrhos, considered the first-ever meteorological station, and worked as a sundial, telling the time of the day by the position of the Sun in the sky, a waterclock (with water coming down from the Acropolis) and a wind vane.

The Choragic Monument of Lysikrates, a wealthy patron of theatrical plays performed in the theater of Dionysus. In 1658 a French Capuchin monastery was built on this site, where Lord Byron also stayed during his second visit to Greece. In 1818 the first tomatoes

ever in Greece were planted in the monastery’s garden.

Palamas. There is also a marble slab to indicate so. At Kydathinaion 9, there is the residence of the families Seferiades and Tsatsos. The ground floor was allocated to Giorgos Seferiades, the famous Greek poet Giorgos Seferis. The upper floor was the residence of Ioanna Tsatsou, sister of Seferis and wife of Konstantinos Tsatsos, President of the Hellenic Republic during the period 1975-1980. At Dioskouroi Street 4, you can find the personal archives of Nobel Laureate poet Odysseus Elytis and an exact representation of the poets’ study room as well.

Cine Paris, an outdoor cinema whose screen is on the rooftop with a stunning view of the Acropolis. Its trademark is the Greek collectible versions of foreign films’ posters.

Anafiotika, a neighbourhood within a neighbourhood. Like a small Cycladic island with white cubic houses and blue doors and windows, partially covered by bougainvillea flowers, -built by craftsmen called by King Otto to build his palace-, Anafiotika is an oasis of tranquility in the center of the Greek capital.

The street art– Many philosophical Artists have left their marks on the walls or stairs of Plaka. You can find phrases like “Next to you, I learned to live, I learned to exist” or “Whatever we lost in the fire, we will find in the ashes” and “By stepping backward no-one has ever moved forward” among others.

0
Polina Paraskevopoulou February 7, 2021
No Comments Yet