Cabernet Franc grapes are mainly grown to be blended with the Cabernet Sauvignon and Merlot in a Bordeaux style and can also be vinified alone.

It’s usually in the shadow of the iconic Cabernet Sauvignon, while many tend to liken it to Sauvignon’s feminine side. It makes a bright pale red wine that contributes finesse and lends a spicy aroma that blends with more robust grapes.

Cabernet Franc is believed to have been cultivated originally in the Libournais region of southwest France sometime during the 17th Century, although recent research shows Spain as the country of origin; and in particular the Pais Vasco region near the border of France.

Cabernet Franc is cultivated in Greece too and is found in single varietal vinifications and blends. Below we check out four prime Greek labels. Two single variety and two blends.

The ethereal character of Cabernet Franc is clearly reflected in this rare bottling by Hatzimichalis Estate winery in the Valley of Atalanti in central Greece. Many consider the 2004 vintage as the top Greek red label ever released.

Whoever is lucky enough to get his lips on a glass containing this label should make sure to accompany it with a prominent recipe of red meat in order to enjoy a unique gastronomic experience.

A robust wine, dense and hedonic that can be enjoyed fresh at the current vintage of release but will reward those who decide to age it, with very special moments of pleasure. An authentic, high-level expression of Cabernet Franc.

A special wine for special moments. It would pair well with a plate of slow-cooked game accompanied with a wine sauce.

Synoro means Border and its name comes from the bordering estates that are also depicted on the label. A blend of 40% Cabernet Franc, 40% Merlot, 20% Agiorgitiko.

A rich and at the same time elegant wine whose complex character seeks the complexity of slow cooking. Try it with wild boar cooked along with hot spices in the pot.

An emblematic label of this Greek vineyard. It was one of the first if not the first premium label to be released in Greece in the late 1980s. A blend of 50% Cabernet Sauvignon and 50% Cabernet Franc.

The Magic Mountain from Nico Lazaridi is proof of the fact that classics are forever and favourites are for sometimes.

Pairs very well with slow-braised veal or a porterhouse steak.

Happy International Cabernet Franc Day to all you wine lovers out there! 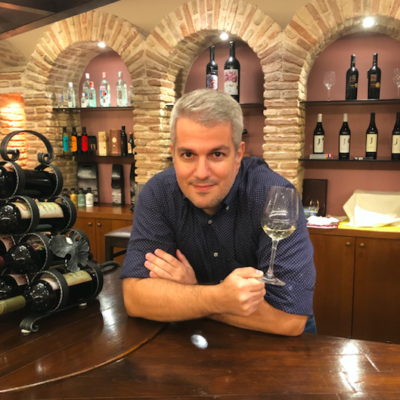 Athens local George Kormaniotis was introduced to wines in 2007 and since then he has spent time market researching, blind tasting, trying new labels, and exchanging ideas and opinions with other fellow wine enthusiasts. In his spare time, George has made it his mission to change people’s perceptions of Greek wines and shares his explorations on Instagram @george.winestories

0
George Kormaniotis December 4, 2021
No Comments Yet