It’s a sunny Sunday and the early morning drive to Nestos riverside is filled with Abba songs, caffeine and excitement. A three-hour hike through Nestos Gorge is definitely something to be excited about!

River Nestos separates Macedonia from Thrace and flows into the Thracian Sea, in its famous Delta, which is a National Park. According to Greek mythology, Nestos (or Nessos), a name associated with the verb Nasso, was born at the beginning of time -before humans even existed- along with 12,456 rivers and 3,000 Nymphs. His father was Oceanus and his mother was Tethys.

Nestos is divided into two parts- the Nestos Gorge at Toxotes, Xanthi and the Nestos Delta at Chrysoupoli, Kavala. The views of both are quite frankly breathtaking.

We arrived at the meeting point, Nestos Adventure Park minutes before our guided trek group departed. The route is not a difficult one to follow but seeing as this was our first time, we figured it would be best to book tickets and go with a guided group- “jaywalking” is my middle name after all.

The sandy beach at the start of the tour, Galani Beach of Nestos, smelled like fresh river water and pine trees, a beautiful scent that set the mood for the rest of the day. We stopped to stare at the children playing on the shores and the adults about to embark on a kayak adventure. ‘This must be fun,” I exclaimed and my husband agreed that this would be next on our list of baby-free weekend activities.

The path across the river basin of Nestos on which we were currently loping certainly seemed rather narrower than I had been anticipating. But the golden alluvial land and the blue lagoon unfolding views ahead compensated for the lack of it.

We were only 10 minutes into our walk when we stopped to admire the views of the continual train tunnels- there are around thirty tunnels along the total stretch of the railway built by French engineers during the Ottoman Empire to create a route that connects Thessaloniki to Constantinople for the famous Orient Express train to pass through. The railway line does not operate anymore but these are a reminder of a once-famous train journey connecting not only the West and the East but also Thessaloniki to Alexandroupoli with multiple picturesque villages in between.

Further down, the path was getting steeper but the views of the river meanders, the rocky gorge and the stunning mountain backdrop made it impossible not to feel humble and realise that this was perhaps one of the best hiking experiences I’ve ever had in my life! Bridges and 19th-century stone-built tunnels formed a setting that few can forget.

A few benevolent stray dogs accompanied us, wagging tails each time lunch-packed sandwiches made their appearance. After an hour we reached the Viewpoint Nestos Gorge and it was then that our guide shouted that we are halfway through the tour. The views from up here are spectacular – from one side you have the best valley and mountain views and from the other side you can see the stretch of the river. Unintentionally, we found ourselves gazing at the deep end of the mountain and experiencing a feeling of inner peace and solitude.

Even though there are many trek routes to follow, we chose the hiking route Toxotes – Kromniko, which took four hours to complete and get back to the starting point. The path was walkable and ideal for people of all fitness levels and ages. Among the many things we loved was crossing the riparian forest, watching free horses running in the mountain, having lunch outside the abandoned Kromniko train stop and admiring the three main meanders of the river, which, according to Greek mythology, were created while Nestos was looking for his way between the wild slopes of the mountains.

Once we made it back to the car park, we had a much-needed coffee break to gather some energy and loosen the muscle knots in our legs at Canteen Galani by the beach. The rest of the group went on to have a late lunch at the nearby taverna ‘Ta Tempi tou Nestou’ but we left as we had an hour’s drive to make it home.

This is the kind of weekend activities I want to see myself doing more of in 2022! 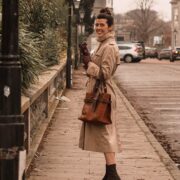 Cycladic Island Holiday Homes Most in Demand in the Mediterranean

0
Anastasia Fountouli March 8, 2022
No Comments Yet