Philhellene photographer Mark Wilman, creator of a successful six-year project and book ‘Discovering The Beauty of the Cyclades’ describes his first discovery of Anafi.

Mark’s project has been presented by the British Embassy in Greece, the Greek Embassies in Rome and Tel Aviv and the Aquarium of Milan. His evocative photography and writing transport you to the heart of the Cycladic culture, landscapes and colours. And if you want to experience it for yourself, he is available to offer photographic tours. As a child, the Londoner with Caribbean blood went to Anafi as one of his first Cycladic island experiences, described here. This personal story about Anafi is the second in a narrative series created by him especially for In+Sights Greece that will run over the next few weeks.

Discovering the Beauty of Anafi 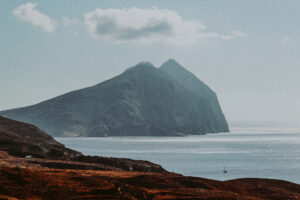 Years had passed and still I stared over curling crests towards Anafi; Mount Kalamos, its towering monolith in white, reflecting light to where I stood in Lucas bay, that day, on Ios island. “Enough”, I thought, it’s time to go. “It’s been so long that I’ve said, no, but not this time, no, not this time.”

Heading back to Manganari on ancient paths as guide, I packed my inflatable, other belongings and sighed. The forceful waves of deepest blue were extra rough beyond Santorini, and though the ship plunged and soared – no way to get bored – I enjoyed myself serenely.

I slept in the port in a room by the water overlooking my boat now inflated and ready to sail. Next morning at seven, I awoke to a view as sweet as any I’d seen. “Like heaven unveiled”, I decided, and with petrol and cheese pie waved goodbye to the lady who owned the hotel. 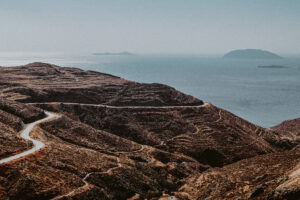 Pachia was first then it was Makra, two islands not near but neither that far away. From south to north I travelled the sea to where the Monastery of Kalamiotissa sits atop the famous rock and looks out as far as the eye can perceive.

Two anchors down from bouncing around, I entered and dived and felt more alive, but had to resurface for air. Above my head, birds galore were squawking to the extreme, so I left to explore elsewhere, somewhere I’d still never been.

First, there was Hora with its personal aura of complex historical charm. I crisscrossed its streets to where everyone meets high-up in the centre of town and from there I could see as far as a tree near a rock shaped much like a crown.

Next day, the spray from the sea was all over meas I navigated the island entirely, and happy I was to write it all down in my personal leather-bound diary.