An artist with many facets, Jean Stephan has been creating all kinds of hats, waistcoats, and a multitude of unique art pieces throughout his life, both as a hobby and professionally. More recently he has centred on his love of Fascinator hats, which although quite an eccentric and unusual accessory to wear – one hardly sees anyone except members of royal families wear them- nowadays have started to generate a buzz in Greece. This exposure is set to grow in late September when he will be presenting his first Athens exhibition. With a real understanding of Greek life, Jean Stephan lived in Athens for 17 years, and is now coming and going between Greece and Austria.

Jean Stephan’s family on his father’s side left Hungary just before WWII and moved to France. His three great aunts were “from a good bourgeois family so all they knew how to do was sew and playing the piano,” he says. “One became a piano teacher, my grandmother became a seamstress and her sister Frida Redei became a milliner whose designs became extremely successful in Paris. She bought what was left of Elsa Schiaparelli’s wooden shapes and used them to create her own designs. Unfortunately, before Frida threw all her shapes away because people weren’t wearing that kind of hats then. I was devastated!”

When he was around 17, Jean Stephan started socialising and enjoyed dancing French rock and roll at high society parties, where the girls he frequented became enthusiastic recipients of his hats. Soon their friends and mothers started to commission their own designs to buy from him. “They were extremely conservative hats and slowly they evolved into what you see today,” he says, describing the designs that he mounts on headbands and are especially worked for special occasions. “I’ve been making hats all my life more as a hobby than as a profession because I was focused on other areas like interior design and stage design.”

“I always have to discuss thoroughly with the client what they want,” says Jean Stephan. “For what occasion they want it and their personality, as well as materials and prices. My 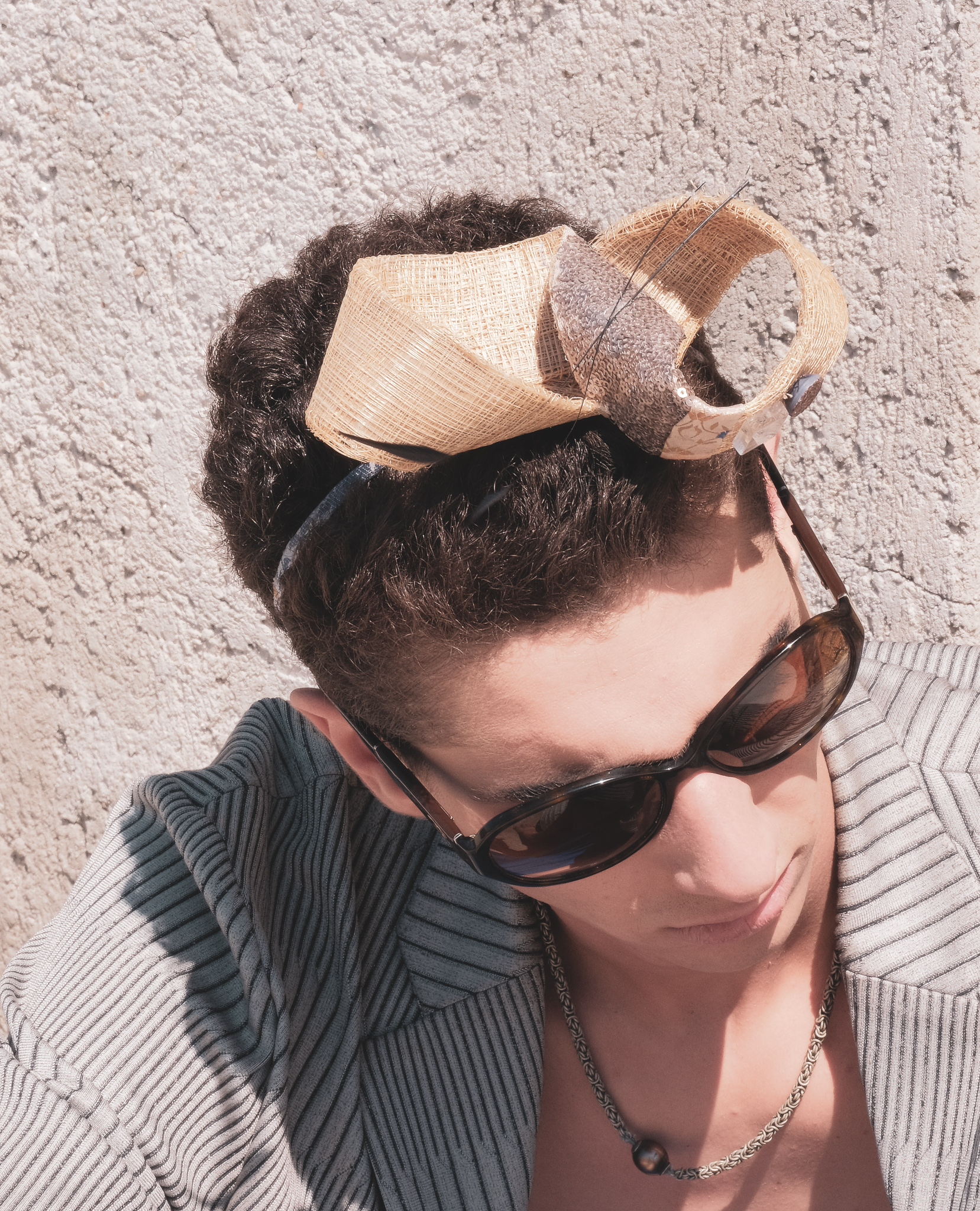 hats are quite architectural, so it takes a long time to make each one. I play with the materials, sewing them together, changing their structure, working with feathers, gold buttons, semi-precious stones, and so on. I generally try to use only natural materials – my ideal is that my hats can be totally recyclable.”

Bringing a New Concept to the Greek Scene

The next step was interest he received from Eleni Marneri, who successfully runs the Eleni Marneri Galerie in Makryianni, which mainly showcases contemporary Greek jewellery but also presents inventive seasonal art exhibitions. “Eleni and her associate Ersi Kozolaki have seen my fascinators for a while now and they proposed I present an exhibition at the gallery. It was supposed to take place in May but was postponed because of COVID.” The exhibition has now been moved to the end of September 2020, COVID-permitting.

Going from Fascinator to Object D’art

Jean Stephan described how from making fascinators for wearing, he developed a new idea of how they can be used as decorative home objects as well or instead. “When I was discussing the exhibition idea with Ms Marneri, I was in the process of creating some cardboard frames as art objects,” he says. “So I worked on conceptualising that these frames would be in a plexiglass box and the image that would have been inside the frame was in fact engraved on the outside of the box. I proposed combining these frames with my fascinators as part of my exhibition. There is also a piece I designed that combines the two that are inspired by Aristophanes’ The Birds (Ornithes).

“My idea is that my fascinators can also be used not only as a headdress/hat but also as an art object that can be placed in the plexiglass box that can be placed in your house. That’s one of the main reasons that in the most recent photoshoot of my hats I wanted them to be worn by a young man who represents a completely gender-fluid identity, instead of them being presented just as ladies’ hats.”

For more information on The Eleni Marnerie Gallerie

For more information on Dimitris Dassios