This World Heritage monument, whose church has some of the most stunning mosaics in Greece, has been under almost constant repair since its beginnings. The plot, once a laurel wood, first held a temple dedicated to Apollo Daphnephoros (the laurel bearer). That was destroyed in 395 A.D. by barbarians, all but a few Ionic columns, which were 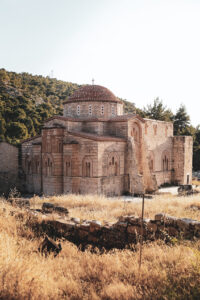 incorporated into the first monastery erected in its place in the 6th century. Only one is left; Lord Elgin made off with the rest, which have been replaced with obvious too-white marble copies.

Despite its prestige, it was later abandoned until the 11th century, when someone high up in the Byzantine imperial court restored   it, building a new church and lining it with ravishing mosaics. But with the nefarious Fourth Crusade in 1204, Crusaders took over the Byzantine empire and the monastery became part of the Duchy of Athens, run by Cistercians. The sarcophagi near the entrance belong to two Catholic dukes.

Semi-abandoned once more under the Ottomans, it was variously used as a garrison, a base for Greek revolutionaries, a Bavarian bar- racks, and a lunatic asylum as well as a monastery. In our day, though, owing to earthquake damage, it has been closed for repairs for decades and has only recently become visitable again.

Worth seeing are the crenellated battlements of its outer walls, the cloisters on either side and the superb mosaics – of the Life of Christ and the Virgin, the saints and prophets – dominated by the piercing eyes and stern face of the Pantocrator (Ruler of All) in the golden dome. There’s no doubt he knows your secrets. But take your binoculars because, except for the flowers above the north door, most of the mosaics are too high to examine properly. Many gaps reflect the church’s chequered history, but it’s a miracle any survived. There was even an attempt to melt down the tesserae for their gold.

Tip: At the Haidari ‘death’ camp just beyond the monastery, hundreds were executed by the Nazis in 1944 in reprisals for partisan attacks against them. It was the most notorious prison in Greece.

111 Places in Athens That You Shouldn’t Miss can be found at all major bookstores worldwide as well as online at Amazon.