Christopsomo (Christ’s Bread) is a type of traditional Christmas bread prepared all across Greece. The bread itself and the ceremonial nature of preparing it symbolizes the prosperity of each household.

It is typically made on Christmas Eve, but in several parts of Greece, it’s also prepared for New Year’s Day and the Epiphany (January 6).

There are many variations of this recipe in the different regions of Greece. The bread is usually large in size and round, sometimes elaborately decorated, but most commonly covered in sesame seeds and decorated with a big cross that has a shelled walnut at its center – a symbol of fertility.

The recipe I am sharing is a simple Christopsomo – a large, round loaf topped with a big dough cross, a shelled walnut and sesame seeds, no complicated or elaborate decorations in sight. This is the version that you most often see in bakeries in Athens.

To honor its symbolic importance, high-quality ingredients are used for this particular 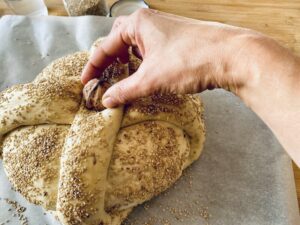 bread such as honey, rosewater, nuts, sesame and aromatic spices such as cinnamon, clove, nutmeg, anise seeds and cumin. I put anise seeds in the bread mix for extra sweetness and aroma, while the hints of cinnamon, clove and nutmeg add an extra festive flair!

Mix the two flours in a large bowl. With your hands shred the yeast (if using fresh yeast or sourdough starter) and add it to the flour mix. Add in the cinnamon, clove, nutmeg, anise seeds, and sugar, and mix. Make a well in the center. Gradually pour in the water and salt as you mix with your hands. Knead for about 10-15 minutes. Cover with a clean towel and 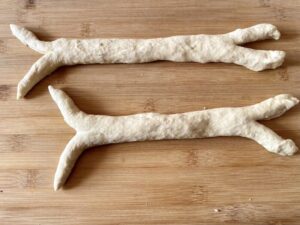 Uncover and knead again to release the air. Cut 260 gr from the dough and set aside. Line a baking tray with parchment paper. With the rest of the dough shape a round loaf and place on the parchment paper. Divide the remaining 260 gr of dough into two equal pieces of 130 gr. Roll them into two long ropes of equal length and then cut their ends with a knife (see the above photo). Spray the loaf with water and place the two long ropes crosswise, attaching the end pieces of each rope at the bottom of the loaf. Spray again with water and sprinkle with sesame seeds. Allow the loaf to rise once more for 45 minutes. Place the walnut in the center and let rise again for another 45-60 minutes.

Preheat oven to 230 degrees C. Spray the bread with water to create a crispy crust. Alternatively, you can spray it with sugar water for a sweeter and glossier result. Place bread on the lowest rack and bake for 20 minutes at 230 degrees C. Bring the heat down to 200 degrees C and bake for another 25-30 minutes. Remove from the oven and allow it to cool down on a clean towel or a rack.

This recipe first appeared in Culinary Backstreets and was created by talented chef, food writer, and stylist Carolina Doriti.

You can read our interview with Carolina here.

5 Great Places to Read Around Athens