In 2014 Evripidou St, the “spice street” of Athens, became even more sensorily exciting with the opening of the restaurant-deli Ta Karamanlidika Tou Fani, located in a old lovely stone house with a pretty, naturally-lit courtyard.

Through this restaurant, a few years ago a second one opened on Ermou 119, as Fanis Theodoropoulos of the Arapian family, who came to Athens after the fall of Asia Minor in 1922, aims to honour the culinary traditions of the Byzantine 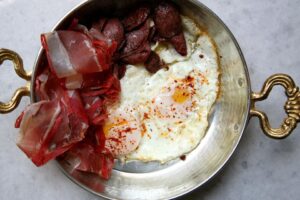 Being amongst the Greek Orthodox community from Turkey with origins in Cappadocia and Cilikia, who were known as Karamanlides, Theodoropoulos lovingly entices and satisfies the appetites with a whole host of meze and main dishes.

Both at the original restaurant on Evripidou and the new one on Ermou, artfully-made, freshly prepared and deeply flavoursome specialty dishes include pastourmas of beef, kavourmas (a terrine cooked with spices and egg), soutzouk, salamis coated with various spices, hams and aged PDO cheeses. The cured products are made by partner/producer Paraskevas Sarimiboyas at the Sary workshop in Drama, where even the Xinomavro vine leaves used for their juicy, tender dolmades are grown. 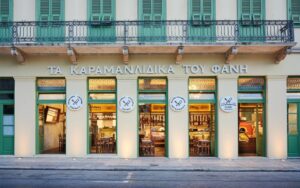 I had the pleasure to visit the newer restaurant (accompanied by the wonderfully vibrant and Athens-savvy Livin’ Lovin’ tour guide Katerina Tsipiti who introduced me to the new place), try some of the flavours and interview Theodoropoulos, who joked that soon his family will be permanently locking him out of the house as he dedicates so much time and effort on perfecting the two restaurants. He also explained that the main difference at the twin restaurant on Ermou is that it has a wood-fire oven where fluffy, lightweight pies and breads are baked on the spot, which is why it’s called “to ergastiri” 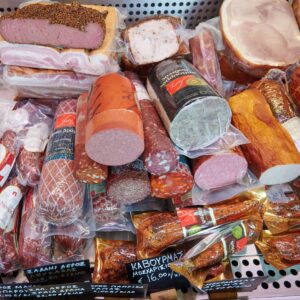 We tried a delicious taramosalata with Greek bottarga, rice-only dolmadakia, kavourmas, beef pastourmas pie and spinach pie, accompanied by icy tsipouro. Apart from many types of raki, tsipouro and wines, the restaurant also serves a satisfying variety of Greek craft beers. Turkish dessert lovers shouldn’t miss out on baklava, Kiounefe and kazan dipi, made with pure butter, as well as phoney and sesame pasteli, baklava, rice milk and homemade jams.

Many thanks to Livin‘ Lovin tours Athens.

Bringing A Slice of the Mediterranean Home